Last week, I told you about a presentation I attended during the recent D23’s Destination D – “Animating the Disney Parks.” We’ve already learned about Claude Coats and how he brought his talents as a Disney artist to designing Disneyland. Today we’ll take a look at Disney Legend Herb Ryman, as remembered by former Imagineer Eddie Sotto at D23’s Destination D event. An art director and designer, Ryman was hired by Walt Disney in 1954 to create the original concept drawings for Disneyland. Walt needed something for his brother, Roy Disney, to show to investors during his initial pitches for the new park.

“Herb was a place master,” remembered Sotto. He understood production design and used historical context to bring real meaning to the places he created at Disneyland. When designing Sleeping Beauty Castle, he visited the famous Neuschwanstein castle in Germany; his visits to New Orleans during the development of New Orleans Square brought a realism to the area. 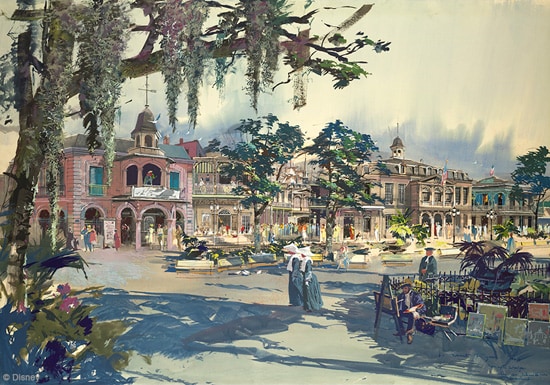 Ryman’s work was “placemaking of the highest order,” according to Sotto, who went on to say that it was his understanding of soul and emotion that made the places he created believable. Ryman knew that life is what informs action – “It’s not just places; it’s what we do in the places” that matters, Sotto said.

Sotto remembered that Ryman was known for this piece of advice: “Be specifically vague.” He meant that designers should create something that anyone could relate to. “He allowed us to see ourselves there,” recalled Sotto.