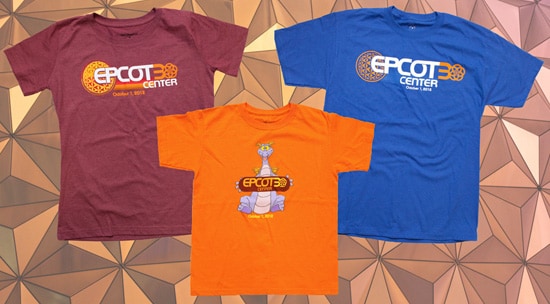 Being a long time fan of Epcot, I’ve been looking forward to the 30th Anniversary celebration all year long. As October 1 draws near, here are some details about our release plans for the merchandise we’ve created.

For starters, we will release a handful of items beginning Friday, September 28 at select locations throughout Epcot. This “weekend of” collection will include a few previously discussed items such as the open edition pins, the “Epcot 30” logo shirts, the baseball cap, and the “toothpick holder” set. We will also release new items including a 12-inch Duffy the Disney Bear and four D-Tech on Demand iPhone 4/4S cases each with an edition size of 300. Also look for 11 new World Showcase shirts that are so amazing I’m writing a separate article about them.

One of the more interesting items is something new called “Cover Your Ears.” This Spaceship Earth-inspired cover will fit over a regular Mickey Mouse ear hat. Additional special ear hat embroidery will be offered at Mouse Gear through October 1.

For this anniversary, we also commissioned Noah (of Epcot International Food & Wine Festival fame) to create a futuristic image that we will offer as a giclée and deluxe print. On Monday, October 1, we will release several “day of” items including three shirts that have “October 1, 2012” and the “Epcot 30” logo, as seen in the first image above. For those who can’t attend that weekend, those three dated shirts and the 11 World Showcase shirts will be sold via the Disney Parks online store from September 28 through October 4.

Monday will also see the release of a commemorative framed coin set and the limited edition pin collection, including the “I Was There” pin. Noah has created a few custom 3-inch and 9-inch Vinylmation figures inspired by his Epcot image. Artist John Henselmeier also designed three, 9-inch custom figures and several 3-inch custom figures that will feature original Future World pavilion logos. All of these items will be released at MouseGear starting at park open on October 1.

Finally, if you trade pins, look for a special pin that will only be found on cast members’ lanyards at Epcot starting on October 1. I hope to see you there (I’ll be wearing my retro EPCOT Center hat with gold leaves).

Read these previous posts on the 30th anniversary of Epcot: