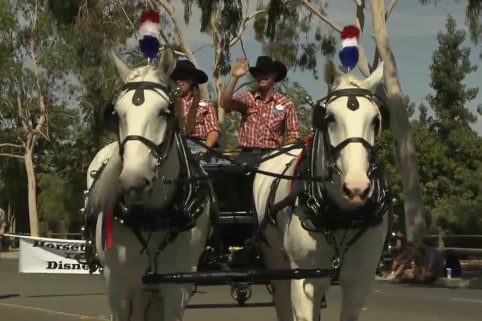 This Labor Day, two of our very own Circle D horses were given a place of honor in the Norco Labor Day Parade. They were right at home, because Norco, Calif., is known as “Horsetown U.S.A” and is home to approximately 17,000 horses.

If the vis-à-vis carriage they’re pulling looks familiar, it has been used at the Disneyland Resort for more than 20 years. In French, “vis-à-vis” means “face-to-face”; the two passenger seats in the carriage face each other.

Brother (the one with the pink nose) and Reggie pulled the Celebrity Marshall carriage, which carried Disneyland Resort Ambassador Jolie Hales and Circle D manager Roy Hungerford. It was the first time in 15 years that Disneyland horses have participated in a municipal event!

Read the story of another Circle D Corral horse – Owen – in the posts below: