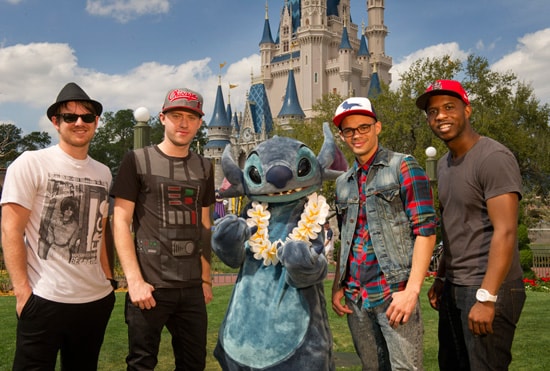 Just a few days until Night of Joy 2012 at Magic Kingdom Park – very exciting. FYI: I hear tickets are going pretty quickly; so you might want to get yours soon if you want to go. It’s a great time.

The four-member band – made up of Tauren (lead singer), DJ (guitar), Blake (bass) and Jarrod (drums) – met while in school in Indianapolis and began to hone its sound while playing for churches and youth groups around the country. The guys call their sound a mixture of pop, rock, R&B, hip hop and worship, with hits like “Make a Move” and “Hold Me Together.” Though just one studio album into their career, they were nominated for a Grammy this year for Best Contemporary Christian Album for their debut record, Black or White.

The guys stopped by Magic Kingdom Park recently and even had time to challenge one of their favorite characters to a “dougie” dance-off.

In addition to Royal Tailor, Disney’s Night of Joy features 16 of Contemporary Christian and Contemporary Gospel’s top artists. Here is the stellar lineup.

Night of Joy is an after-hours event that requires a special ticket. Event hours are 7:30 p.m. to 1 a.m. each evening. While artists perform at several stages, many popular Magic Kingdom Park attractions also are available for guests. In addition, there are special benefits for groups of 10 or more. Additional information about individual and group tickets is available at www.nightofjoy.com.