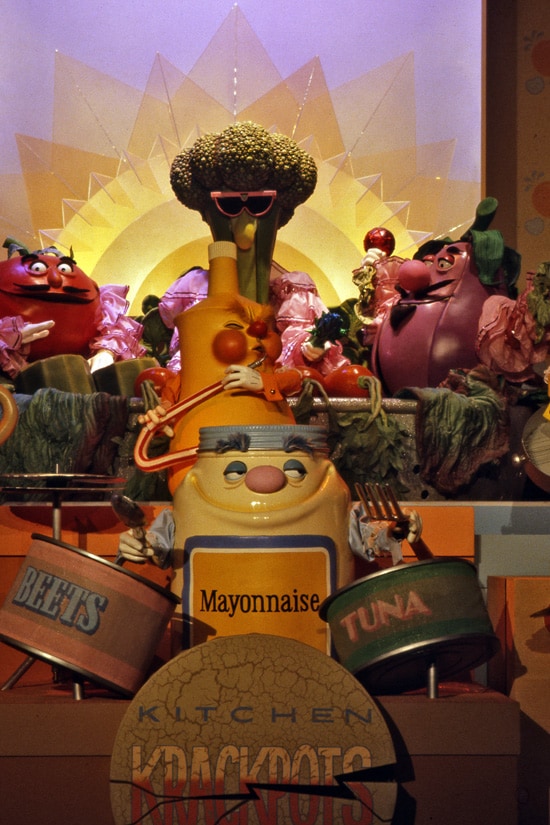 We know that many of you are fans of early Epcot history, and in honor of the park’s upcoming 30th anniversary, we’re starting the celebration early by sharing Epcot Photo Flashbacks with you each Monday through October 1.

I first set foot in Epcot (then Epcot Center) when I was 7 years old. I remember feeling wowed at the glimpses of the future that were offered in attractions like Horizons, World of Motion, Living with the Land, and The Living Seas. But in my opinion, no attraction offered more fun than Kitchen Kabaret!

This attraction was housed in The Land Pavilion and starred a cast of quirky characters who sang, danced, and told jokes to prove that good nutrition was also fun. Hosted by Bonnie Appetit, the kitchen came alive with singing cereal boxes, a crooning carton of milk, toe-tapping toast and much more. Who didn’t love the wisecracks served up by the comedic duo of Hamm & Eggz? Or Colander Combo and Fiesta Fruit’s signature song, “Veggie Fruit-Fruit”? Sing it with me: “There are no substitutes for we veggie, fruit-fruit, veggie-veggie, fruit-fruit…!”

For the latest on the 30th anniversary of Epcot, be sure to follow @WaltDisneyWorld on Twitter, and join the conversation with the hashtag #Epcot30.