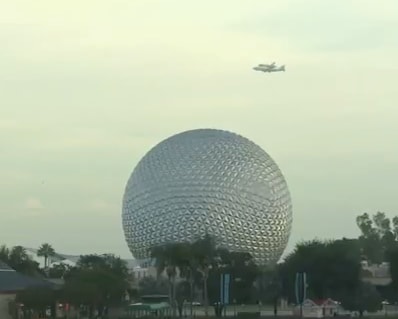 In a place where fairies fly, Space Shuttle Endeavour made a “ferry flight” today, mounted atop a NASA-modified 747 airliner. The historic flight took place in the early morning hours and was a space-explorer surprise for early-rising guests across Walt Disney World Resort. As part of its flight path, Endeavour soared over Magic Kingdom Park and could be seen from various points across property.

When a space shuttle is mounted above a 747, the NASA term for it is a “ferry flight,” which is quite appropriate since Magic Kingdom Park is a place where fairies fly.

Conducted in cooperation with the Federal Aviation Administration Endeavour’s cross-country journey is the final ferry flight of the Space Shuttle Program. Endeavour’s final destination is the California Science Center in Los Angeles, where it will be on display to inspire future generations with the storied history of the space shuttle era.

As Endeavour makes its way across the country, our friends at NASA encourage people who spot it to use the Twitter hashtags #SpotTheShuttle and #OV105 (Endeavour’s official orbiter designation). To keep up with Endeavour’s cross-country journey, log on to NASA.gov for the latest updates.