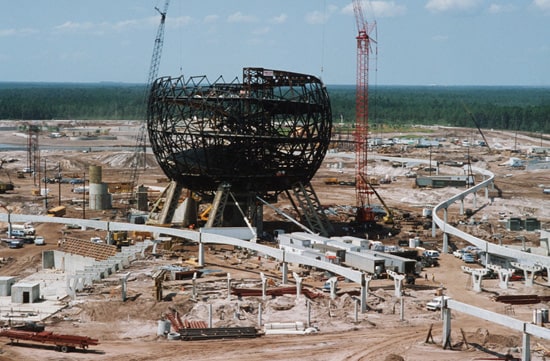 The Scientist Who Inspired The Name of Epcot’s ‘Spaceship Earth’

It’s no secret that Walt Disney was deeply interested in progress and the work of great futurists of his time, like Ray Bradbury. But did you know that the work of one great mind in particular actually inspired the name of a classic Epcot attraction?

That man was R. Buckminster Fuller, a theorist/futurist, who studied how technology could improve our daily lives, including in the area of housing. Two of his major works may sound familiar in terms of Spaceship Earth: First, in 1951, he patented a design called the geodesic dome that was lightweight, cost-effective and easy to assemble. Then in 1968, he published a book called, “Operating Manual for Spaceship Earth,” in which he calls people astronauts and describes how the planet needs continual maintenance in order to keep operating, just like a vehicle.

According to Disney Legend John Hench in his “Designing Disney” book, Fuller’s work was a huge inspiration in shaping what would become the park’s icon:

“We assumed from the beginning that we needed a large sphere for the Epcot icon, and we wanted one with enough space inside for an attraction. We were familiar with architect Buckminster Fuller’s experiments with building the geodesic dome he had invented in the 1940s, including the one he had constructed for the Ford headquarters in Dearborn, Michigan, in 1953. Fuller’s famous phrase ‘spaceship earth’ also appealed to us.”

Excited for Epcot’s 30th anniversary? Follow @WaltDisneyWorld on Twitter, and join the conversation with the hashtag #Epcot30.