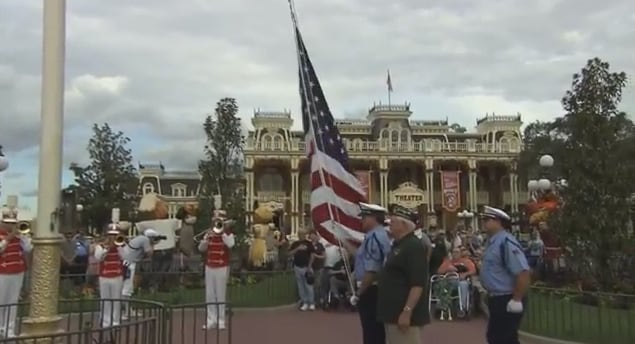 About 60 veterans of the United States Navy destroyer USS John R. Pierce recently joined us at the Walt Disney World Resort for a special reunion. The group not only visited the park but also attended and participated in a flag retreat ceremony at Magic Kingdom Park. One of the veterans, Dick Brennan, helped lower the flag and then carried it down Main Street U.S.A., with other crew members.

Among the other veterans of the USS John R. Pierce attending the reunion was John T. Pierce, son of John R. Pierce, who served on the ship named for his father from 1955 to 1957. The veterans at the ceremony served between 1944-1967. Many stayed to watch that evening’s fireworks.