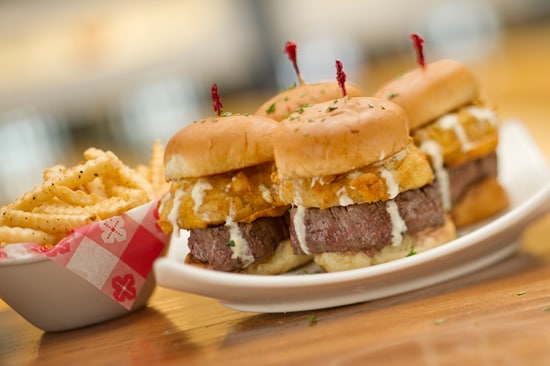 A Refreshing Spin on Alley Eats at Downtown Disney

Dine. Drink. Bowl. Maybe in that order for some of us – that’s the approach to having fun at the soon-to-open Splitsville Luxury Lanes at Downtown Disney West Side. And, wow, this two-story “bowling alley” puts a new spin on the sport with 50,000 square feet of fun for the entire family – 30 lanes cleverly separated into clusters, two kitchens, dramatic architecture, outdoor seating, billiard tables and live entertainment. 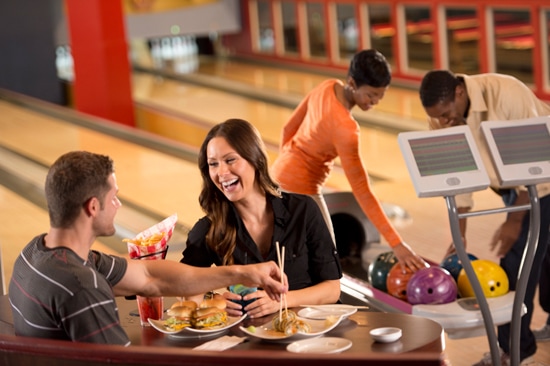 We love that there’s a bowling concierge who delivers your shoes to your lane. We’ll go just for that privilege, plus a waitress to take our food and drink orders. Roll a few strikes and spares, soak up the energy, then grab a menu and get bowled over by the cuisine created by Tim Cushman, one of Food & Wine magazine’s “Best New Chefs” in 2008.

There’s sushi rolled on display – and they’re serious about freshness, since “who would expect sushi with bowling,” says Mark Gibson, co-founder of Splitsville. So they’ve got experts slicing and dicing everything from California rolls to spicy tuna to their signature Crab Rangoon – a dozen rolls in all.

But ask Gibson his favorite, and he’ll tell you that the appetizer-sized filet sliders are right up there, served with onion rings and horseradish cream. Other starters include 3-pepper calamari sautéed with cherry, jalapeño and banana peppers; seared ahi tuna; alley nachos with the works, and Loaded Fries “smothered with nacho cheese, bacon and love,” reads the menu.

The extra-juicy burgers are a blend of Black Angus brisket, short ribs and ground beef, and if you’re really hungry, order the triple-decker Mad King burger, a full pound with double cheese and bacon, topped with a crispy onion ring. But it’s not all sandwiches and salads. Standout entrées include slow-cooked pulled pork with fries and slaw; blackened mahi mahi with grilled shrimp and spicy, buttery voodoo sauce; an 8-ounce filet mignon; and steak chimichurri. There are seven kinds of pizzas, from cheese to barbecued chicken and the Firehouse with mozzarella, diced chicken tenders, spicy bleu cheese sauce and a drizzle of Ranch dressing.

Enormous desserts to share include made-to-order sundaes, brownie a la mode and red velvet cake with butter frosting (it’s called “Giant Cake” for a reason). And there are plenty of menu options designed just for kids, all for an affordable $7.

And we haven’t even mentioned drinks, from an old-fashioned Icee to and 18-ounce frozen schooner of draft beer. There are signature cocktails like rum runners and piña coladas, snicker-tinis and key lime martinis. And their popular “Bowl” drinks which include Long Island Iced Tea and the Beach Bowl.

Plans are to open the doors at 10 a.m. and keep customers “rolling in and rocking out” until 2 a.m.

“It’s all about families and friends having fun together,” says Gibson. “And while you might come to Splitsville for the bowling and atmosphere, you’ll come back for the food!”