The Celebration of the 30th Anniversary of Epcot is Underway 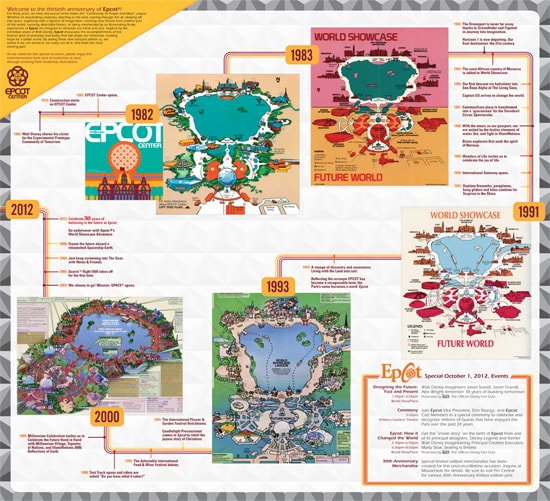 Guests visiting the park today will receive a commemorative button and a 30th anniversary theme park map, the latter of which our partners at the park were kind enough to give to us to share with all of you! The document looks back at how the Epcot guide map has changed as the park evolved over the years.

The fun will continue this afternoon with Epcot history presentations in World Showplace courtesy of D23: The Official Disney Fan Club. These presentations are included in park admission and are limited in seating.

Today there will also be an anniversary moment at the America Gardens Theatre at 3 p.m., which will feature Disney leaders and performances by Mariachi Cobre and Voices of Liberty. (Seating is limited). Tonight’s presentation of “IllumiNations: Reflections of Earth” will also feature a special 30th anniversary tag.

If you’re at home celebrating in spirit today, be sure to check out this video, in which D23’s Steven Clark and Disney Legends Bill “Sully” Sullivan, Bob Matheison and Charlie Ridgway take a look back at the history of the park.