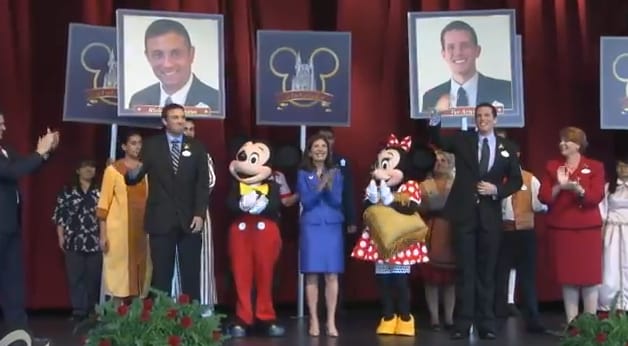 As a relatively new cast member, I was both touched and excited today to be included in a long-standing tradition that has become such an important part of our company’s heritage: the announcement of our two newest Disney Ambassadors.

During a special ceremony at the American Gardens Theatre at Epcot, cast members Tye Arnold and Rich Tamayo were selected for this revered role.

As they received their gold pins in the midst of confetti, cheers and fanfare, both became part of a special group of cast members who have carried on a tradition started by Walt Disney himself in 1965, when he was overwhelmed with appearance requests. Today, Ambassadors may be seen at community events, helping build playgrounds, sorting school supplies for children, greeting special guests and honoring fellow cast members for anniversaries and milestones.

Today’s announcement marks the culmination of an intensive, two-month search for candidates who exemplify the talent and excellence of Walt Disney World Resort and demonstrate an understanding of the company’s heritage and, above all, Disney passion.

Representing more than 64,000 cast members, the pair will share the magic of Disney throughout the resort and the Central Florida community from January 2013 through December 2014.