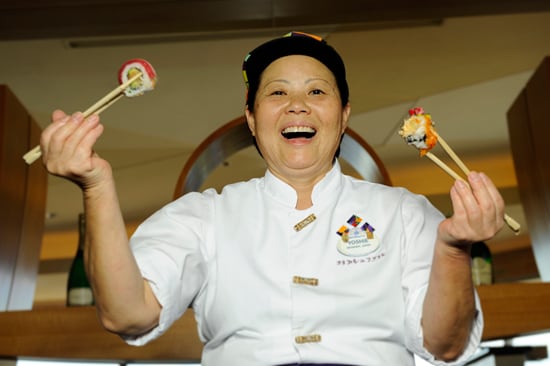 Yoshie Cabral is a fixture at California Grill at Disney’s Contemporary Resort – most nights guests see her deftly creating more than 2,000 pieces of sushi on a busy night.

When California Grill closes in late January for renovations, Yoshie has decided it’s time to take a break – the job of sushi chef involves many long hours of standing, and Yoshie says she’s ready to sit for a while.

She started at the California Grill back in 1995 when she convinced the chef to add sushi to the menu. And at the time, Yoshie was one of a handful of female sushi chefs in the U.S. “They said the temperature of a woman’s hands is too high to handle fresh fish,” says Yoshie with a shrug. But Yoshie proved the critics wrong as she created delectable sushi for a legion of fans.

Though we’ll miss Yoshie, sushi will stay on the menu, says Chef Brian Piasecki, with Yoshie’s protégés carrying on her work.