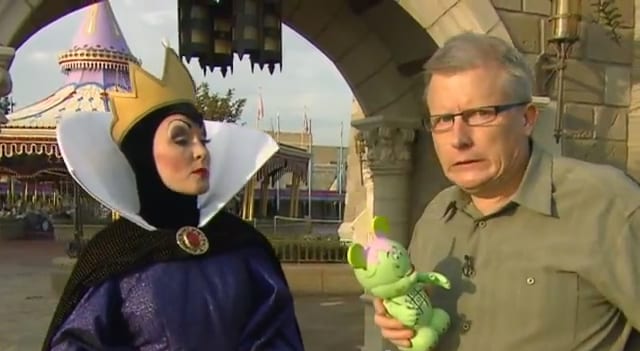 Did the Villains Banish the Dragon from New Fantasyland? When is He Coming Home? Finding Out the Truth Directly from Princesses, Villains and an Anonymouse Source

Scouring the internet for clues about the dragon rumored to be heading “home” to New Fantasyland has been quite a quest — one that’s led me to even more questions. I’ve found archival photos, and had reports of sightings sent to me which have been chronicled on my “Disney Dragon” Tumblr blog.

For a dragon-loving guy like myself I have to admit — it’s been fun, but also frustrating at times. There’s definitely something flying around up there. But I need to find it. I need to see it.

So, I decided to go straight to the source, New Fantasyland, to dig for new clues. I wanted to talk to the residents, royalty and villains of the land. The truth is out there, and I won’t stop until I find it. Interviewing Disney Princesses and Villains gave me a few leads, and a few dead ends. But I feel I am getting closer.

A breakthrough, though, came when I received a hot tip about someone who had reliable information on where our flying friend might appear. While I can’t reveal the name of my anonymouse source, I can say this tipster is in the know about all-things-Disney. My exclusive interview is below.

Stay tuned, because I feel a major breakthrough coming soon. I think the next step in my dragon dilemma might just be an overnight expedition to where this highly placed source advises me to search.

Likes (0)
Share Did the Villains Banish the Dragon from New Fantasyland? When is He Coming Home? Finding Out the Truth Directly from Princesses, Villains and an Anonymouse Source