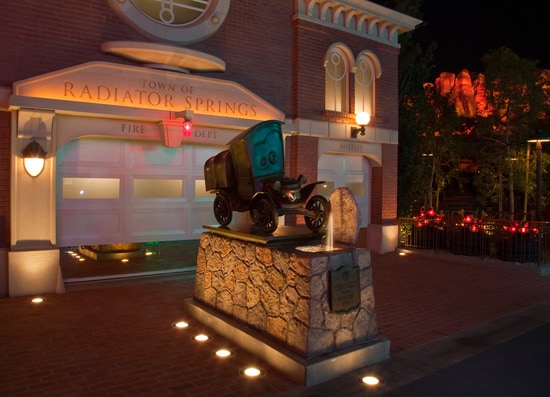 In one of my previous “Disney Parks After Dark” posts, I promised to share photos from my favorite place at the Disneyland Resort after dark, Cars Land in Disney California Adventure park. This one requires little backstory on Radiator Springs: Stanley, the town’s founder, sold radiator caps in Ornament Valley along Route 66. After he discovered an oasis of water (later named Stanley’s Oasis) the little town of Radiator Springs sprung up around that spring in the middle of the desert. A statue of Stanley was built outside the town courthouse in his honor.

He’s donning a Santa suit now during the holidays, but at night, Stanley’s statue always takes on a special glow from the neon along Route 66.

By taking a long exposure, the water around Stanley’s Oasis reflects the light off of the surrounding rocks, and the water flowing from the radiator cap on the Original Radiator Spring becomes more noticeable. The starbursts from the lights on the water tower bring a unique drama to the scene.

What are your favorite Cars Land spots after dark?