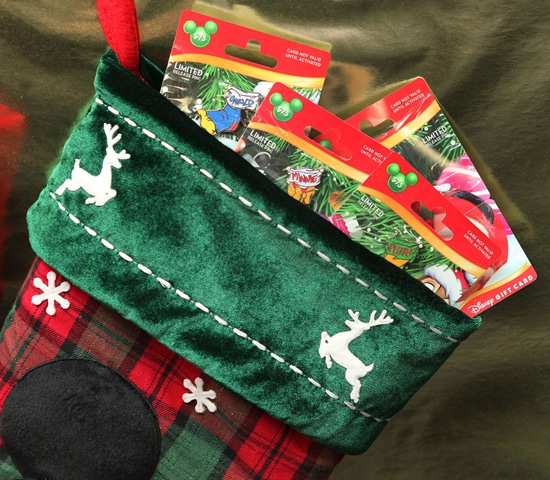 My mother made the holiday stocking I use today when I was about five years old. She sewed an image of a tree with presents underneath along with my name in red across the top. As a child, the stocking was filled with presents from Santa Claus along with fruits, walnuts and loose change. Stockings will be a part of four new Disney Gift Cards being introduced for the holidays. These new cards continue a tradition of packaging Disney pins with Disney Gift Cards that began a few years ago (you may recall my conversation with Annie Lin from the Global Retail Development team last year). I caught up with Annie again to discuss this year’s offerings.

“We are happy to introduce four new Disney Gift Cards this year that can be used for practically all-
things Disney,” explained Annie. “Each card contains a limited release pin that resembles a character’s stocking. We had a few different options in mind for the pins. Holiday stockings seemed to work the best as there are many holiday traditions around them. While growing up, I only received gifts in my stocking.”

Work began on this year’s designs in May 2012. Annie partnered with Gina Jenkins from the Disney Gift Card Services team and enlisted artist Angela Connolly again to create the artwork.

“I like the two different perspectives found in the artwork this year,” said Angela. “When all four cards are placed together, they make a festival holiday image. I like that I could incorporate the reflections of Mickey Mouse, Minnie Mouse, Donald Duck and Pluto along with Chip and Dale.”

Cards are offered for $75.00 each. When purchased, you get a gift card worth $75.00 and a stocking pin. Look for them at select Disneyland Resort and Walt Disney World Resort locations toward last week in November.

In Florida, look for the cards at the four major theme park merchandise locations as well as World of Disney and Disney’s Pin Traders at Downtown Disney Marketplace.

I’m curious to hear your holiday stocking tradition, so please share in the comments below.