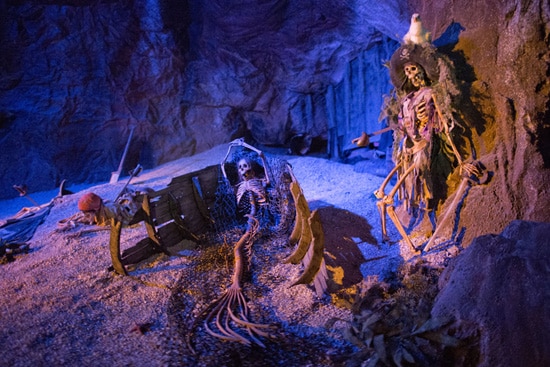 These new additions, the lovely (but also dangerous) Mermaids of Whitecap Bay, recently made their debut at the attraction. You can spot them early on in the attraction’s grotto scene, where you can spy a mermaid skeleton and possibly even catch them swimming alongside your boat. You can also hear a mermaid beckon you with her siren song just before your drop into the pirate battle. Additional rockwork and props have also been added into the Dead Man’s Cove scene.

This isn’t the first time something from the “Pirates of the Caribbean” film franchise has debuted at our Pirates of the Caribbean attraction. Famous faces from the film, including Captain Jack Sparrow, Captain Barbossa, and most recently the ghostly apparitions of knaves Davy Jones and Blackbeard, have all materialized over the years.

Which addition has been your favorite? Tell us in the “comments” section below.