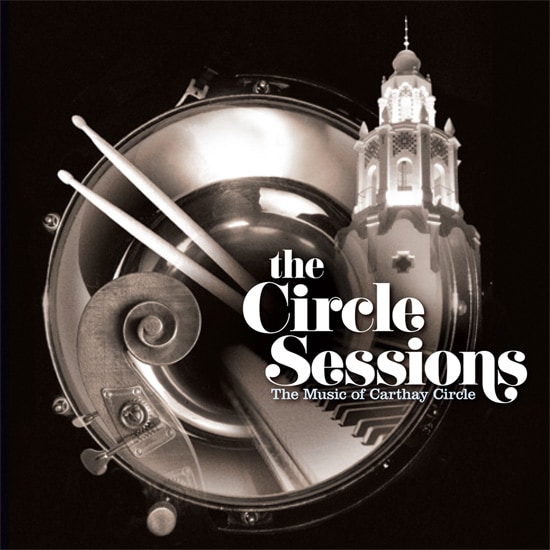 In the wake of the extremely popular “Music from Cars Land” album, another new CD comes out November 6 that has already become a favorite among Disney cast members. “The Circle Sessions: The Music of Carthay Circle” offers, for the first time, sparkling jazz versions of great Disney songs, selected from the soundtrack of the Carthay Circle Restaurant and Lounge at Disney California Adventure park!

“We really wanted to capture music across all generations and breathe new life into treasured and familiar songs,” said John Dennis, Director, Music Production, Walt Disney Imagineering, who is music supervisor and producer of the new album. “Everyone involved wanted to allow the variations to weave a different tapestry for our guests.”

Even though several of the songs were created after the themed 1937 setting of the restaurant, the smooth, evocative jazz approach is right at home in the period. But choosing from the voluminous catalog of Disney songs was a daunting task. In cooperation with Chris Montan, President of Walt Disney Music, these are the eclectic, wide-ranging gems they mined for a fresh, yet classic, jazz approach:

Not only does the CD feature some of the most beloved Disney songs with an upbeat, sophisticated twist, but this timeless collection also creates an ambiance that allows the listener to feel like they are in another time and place.

“Did you know that the selection of music actually changes from the downstairs to the upstairs?” fellow Disney Parks Blog writer Michelle Harker asked me—and I did not know that! “Guests on the first level will often hear these pieces represented by an ensemble trio, while those dining in the restaurant upstairs, will enjoy the same music but in a variety of light jazz piano tones.”

John is quick to point out the musical virtuosity behind this music. On piano is the album’s arranger, Bill Cantos, who has worked with a “who’s who” of the music industry, including Herb Alpert, Lani Hall, Elton John, Phil Collins, Bob Dylan and Burt Bacharach. And while we’re name-dropping, the album was produced by 11-time Grammy nominee Bill Schnee—who has helped such stars as Barbra Streisand, Neil Diamond, Natalie Cole and Whitney Houston to Gold Record awards—and Todd Homme, a longtime music supervisor/producer of music for Disney feature films as well as award winning films such as “Almost Famous,” “Catch Me if You Can” and “Saving Private Ryan.”

Both Bills, as well as every musician you’ll hear, are among the most sought-after music names in Hollywood, heard on countless movie and TV soundtracks, as well as best-selling recordings. You can catch a glimpse of them making this music in Valarie Sukovaty’s “Cue the Dining Music at Carthay Circle Restaurant” post.

Here at Disney, we’re no strangers to hyperbole, as you probably have noticed. But in the case of “The Circle Sessions: The Music of Carthay Circle,” everyone involved has become especially attached to the quality and magic of these performances. “I’ve already been told things like, ‘I play this over and over and never tire of hearing it,’” says John. “Best of all, this CD is the perfect way for parents to introduce their children to jazz music. I feel so privileged to have been part of this project—and that’s probably one of the best reasons.”

Look for “The Circle Sessions: The Music of Carthay Circle” beginning Tuesday, November 6 at Carthay Circle Restaurant and Lounge, and at nearby locations such as Elias & Co. and Off the Page in Disney California Adventure park. (And if you like this album, allow me to also recommend the landmark “Dave Digs Disney” by the iconic Dave Brubeck Trio, one of several albums that paved the way.)