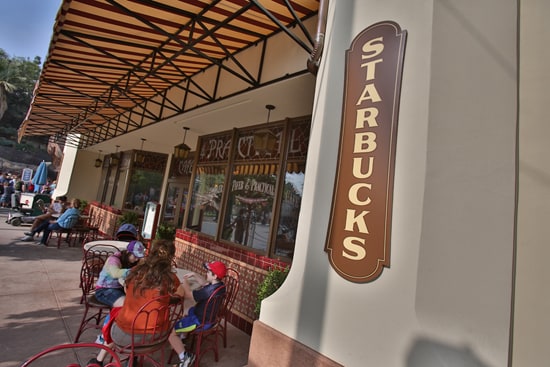 UPDATE 11/12: Here’s some additional information about our Walt Disney World Resort Starbucks locations. The Main Street Bakery will keep its name and theming when it reopens in early summer. It’ll also continue to serve Disney favorites like cookies, brownies and seasonal cupcakes, in addition to Starbucks signature beverages and other items. And for those of you who asked in comments, the cinnamon rolls are available at Gaston’s Tavern in New Fantasyland, and the ice cream sandwiches are available at Plaza Ice Cream Parlor on Main Street, U.S.A.

Today, we’re excited to share that the first two Walt Disney World Resort locations will open next year, one at Magic Kingdom Park and one at Epcot.

Both locations will be designed to fit the theme of their surroundings. At Magic Kingdom Park, for example, cast members will wear a costume consistent with the early 20th century look and feel of Main Street, U.S.A. At Future World in Epcot, the new Starbucks location and cast member costumes will be designed to match the park’s futuristic theme.

The Starbucks locations at Magic Kingdom Park and Epcot will both offer the full complement of Starbucks® signature beverages, artisan breakfast sandwiches and a wide selection of baked goods, including muffins, scones and specialty treats.

More Starbucks locations are coming to Walt Disney World Resort and Disneyland park soon. We’ll be sure to keep you posted!