When the first call went out for Disney VoluntEARS to help raise money for those affected by Hurricane Sandy, I checked my watch. It was 3 p.m. and the first shift started in just three hours. “There is no way,” I thought.

But more than 75 Walt Disney World VoluntEARS quickly showed their character, shifting their evening plans to support a good cause. For six hours, they answered phones at the Disney Reservation Center in Orlando to support ABC’s national “Day of Giving,” which raised more than $16.8 million for the American Red Cross. 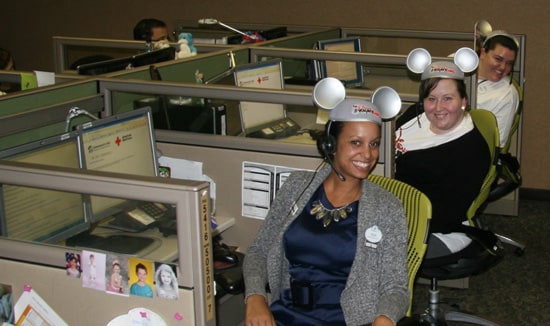 Among the stories the VoluntEARS will never forget are that of a 100-year-old man who donated $100 in honor of his age and 10-year-old Keyla, who did not think twice before donating her weekly allowance.

“Can you send me an envelope so I can send you my $10?” Keyla asked the Disney VoluntEAR, who was touched by the sense of compassion in her voice.

The envelope is on its way, Keyla.

Thank you to all who supported “Day of Giving” and thank you, Disney VoluntEARS!

Check out these past posts about our Disney VoluntEARS: