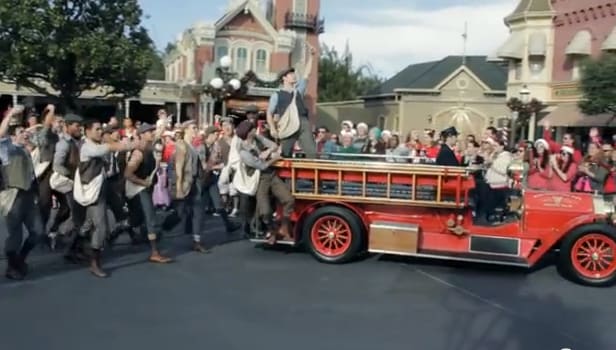 I was lucky enough to see the musical “Newsies” on Broadway in New York last year, and I have to say that I’m thrilled the cast will perform a number that’s never been seen before on TV in this year’s Disney Parks Christmas Day Parade, which will air Christmas morning on ABC on December 25.

While they were here, some of the cast participated in this behind-the-scenes video of their experience. Follow Newsies’ Corey Cott (Jack Kelly), Ryan Steele (Specs) and Jess LeProtto (Buttons) as they travel from their homebase at the Nederlander Theatre in New York, NY, here to Magic Kingdom Park at Walt Disney World Resort to prepare for the taping. Once here, the “Newsies” cast learned an adapted routine to the show’s signature song, “Carrying the Banner,” which they performed on Main Street, U.S.A., inside the park. From the sneak peeks offered up in this video, it looks like their performance Christmas morning will be an absolute blast!

Can’t wait to see this year’s “Disney Parks Christmas Day Parade”? Join the conversation on Twitter with the hashtags #DisneyParade and #DisneyHolidays.