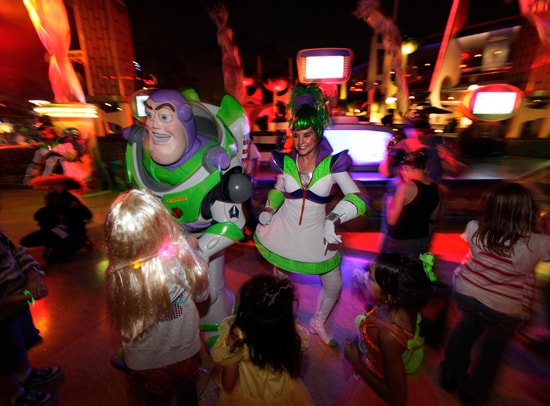 There’s nothing like ringing in the New Year at Disney Parks, but if you can’t join us, we’re keeping the excitement going to begin January with some special “Limited Time Magic” at the Walt Disney World Resort and Disneyland Resort.

First, we’re beginning the New Year at Walt Disney World Resort in Magic Kingdom Park with Tomorrowland’s first ever “Bling in the New Year” dance party. For an entire week, children of all ages can celebrate the start of 2013. You’ll be able to watch live entertainment on Rockettower Plaza Stage, dance to great music and celebrate with some of your favorite Disney characters – all dressed in their New Year’s best. And if you can’t stay up until midnight, there will be a New Year’s countdown every hour leading up to midnight. The celebration begins on December 30 and runs through January 5.

‘Year of the Ear’, Part of ‘Limited Time Magic’ at Disney Parks

We’re also excited to announce that 2013 will be the “Year of the Ear” at Disney Parks. Every month, Disney Parks will release new ear hats to add to your collection as part of “Limited Time Magic.” January will start with the limited release of Disney Couture Ear Hats. And each month, there will be fun designs to discover.

And we’re not done yet. We’ll have more “Limited Time Magic” information to share today on the Disney Parks Blog, including an exciting announcement to kick off the New Year at the Disneyland Resort. Be sure and check the blog later and remember that you can also find updates on Twitter using hashtag #LimitedTimeMagic and on our LimitedTimeMagic.com web page.