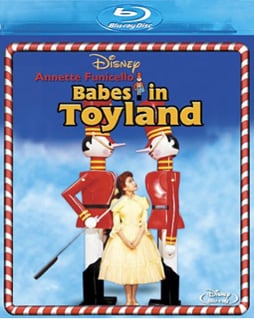 Sights & Sounds at Disney Parks: What Do the Toyland Soldiers Have to Do with the Land of Oz?

The Toyland soldiers in either Walt Disney World Resort or Disneyland Resort holiday parades are a “must-see.” Watching them on our annual Disney Parks Christmas Day Parade is very cool, but experiencing them in person is even more amazing.

They’re exactly like the toy soldiers in Walt Disney’s “Babes in Toyland” (which looks dazzling in its new Blu-ray release). In the big battle sequence, Tom Piper (Tommy Sands) leads the soldiers to defeat nasty Barnaby (Ray Bolger) and prevent him from marrying Mary Contrary (our beloved Annette Funicello).

The “March of the Toys” was directed by Disney Legends Bill Justice and X Atencio. They also directed the “Spoonful of Sugar” special effects in “Mary Poppins” — so look for the soldiers there, too, leaping into a toy box.

The legacy of “Babes in Toyland” began with its first stage production in 1903. The producers were looking for another show to be as big a hit as their other musical extravaganza, which was based on L. Frank Baum’s book, “The Wizard of Oz.”

Ironically, Babes in Toyland was the enduring hit, and its Victor Herbert/Glen McDonough songs became standards. In 1934, producer Hal Roach cast Laurel and Hardy in his movie version of “Babes in Toyland” — which, with Walt Disney’s approval, included a “Mickey” character and the Three Little Pigs in the cast.

Just a few years later, Walt Disney’s “Snow White and the Seven Dwarfs” was a worldwide sensation. Its success inspired MGM to produce a live-action answer of sorts to Snow White, right down to Walt’s innovative use of songs to advance the story. That was 1939’s “The Wizard of Oz,” starring Judy Garland.

On live stages almost everywhere, “Babes in Toyland” evolved from one century to the next, as the characters, storylines and songs got mixed, matched, added and subtracted depending on the productions. In 1954 and 1955, TV viewers watched live TV broadcasts of “Babes in Toyland,” co-written by Neil Simon. Shirley Temple starred in the first color TV version in 1960.

There was even a disco version at New York’s Madison Square Garden in 1979! Nevertheless, dedicated groups of artists keep the original Victor Herbert operetta available to new generations — like the Comic Opera Guild of Michigan, which produced four different cast albums of Toyland between 1976 and 2004.

“Before Walt Disney chose ‘Babes in Toyland’ as his first musical, he dreamed of making an Oz movie,” says Disney historian Jim Korkis. “Walt wanted to combine live action with animation for an Oz feature in the 1930s. When the Mickey Mouse Club Mouseketeers became stars in the late ‘50s, Walt cast many of them in The Rainbow Road to Oz. If you watch the Disney Treasures DVD entitled ‘Your Host, Walt Disney,’ you’ll get an idea of what it might have been like.”

Ultimately, Walt didn’t make either Oz film, but during the 1961 holiday season, his “Babes in Toyland” premiered in theaters. And the first “official” Disneyland Christmas parades also appeared, featuring floats based on the toys from the movie — including the toy soldiers, designed by Bill Justice himself.

Next year will bring the premiere of Walt Disney Pictures’ “Oz, the Great and Powerful” in theaters — and the appearance of the Oz garden during the Epcot International Flower & Garden Festival. It’s been over 100 years and these magical, unpredictable worlds just keep on crisscrossing!

Look below for more “Sight & Sounds at Disney Parks” posts:

Likes (0)
Share Sights & Sounds at Disney Parks: What Do the Toyland Soldiers Have to Do with the Land of Oz?