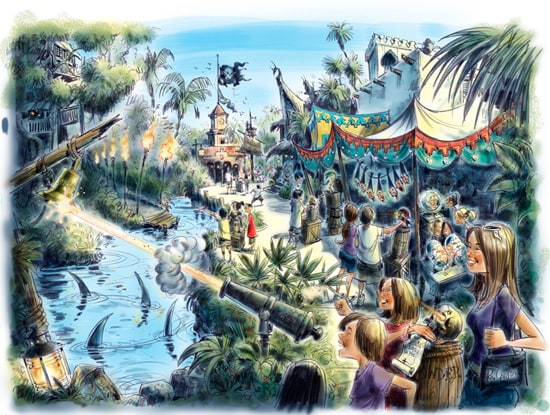 A Pirate’s Adventure: Treasures of the Seven Seas to Debut at Magic Kingdom Park This Spring

We’re happy to share here on the Disney Parks Blog today that a new interactive quest called A Pirate’s Adventure: Treasures of the Seven Seas will debut in Adventureland at Magic Kingdom Park this spring. (And check out this great artist rendering that our friends at Walt Disney Imagineering just shared with us!)

In A Pirate’s Adventure: Treasures of the Seven Seas, guests will use a pirate map and magic talisman to help them complete five different pirate raids throughout Adventureland. The goal is to help locate different Treasures of the Seven Seas and fight off pirate enemies like the Royal Navy and Captain Barbossa, among others. If guests help Captain Jack succeed in all the missions, they’ll be welcomed as part of his new crew. If not, they’ll face the wrath of the cruel sea – alone.

Stay tuned to the Disney Parks Blog for more information on this new experience. In the meantime, if ye be excited to embark on this new pirate adventure, say “Aye!” in the “Comments” section below!

Likes (0)
Share A Pirate’s Adventure: Treasures of the Seven Seas to Debut at Magic Kingdom Park This Spring