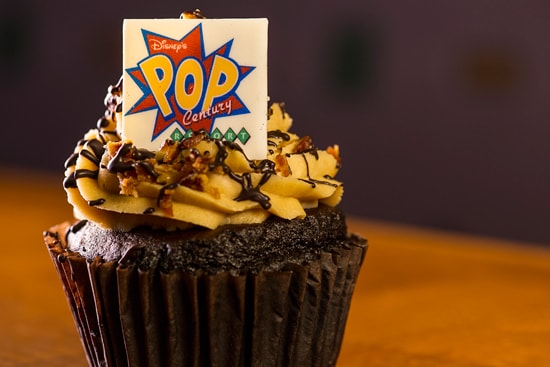 We aren’t at Graceland to celebrate Elvis Presley’s birthday today, but you can bet we’re making a beeline to the Bakery Shop in the food court at Disney’s Pop Century Resort at Walt Disney World Resort for an excuse to dig into The King Cupcake, a tribute to the King of Rock ‘n Roll.

Disney Pop Century Resort celebrates pop culture from the 1950s onward, so it’s a perfectly themed dessert fit for, well, a king. One of Elvis’ favorite sandwiches was peanut butter, banana and bacon, so this sweet is a riff on that unusual combo. Even better than a sandwich, this is a moist chocolate cupcake filled with banana custard and topped with a whipped peanut butter icing. And just for Elvis, there’s a flourish of candied bacon and a chocolate Pop Century logo atop.

Cost is $3.99 and counts as a snack on the Disney Dining Plan.