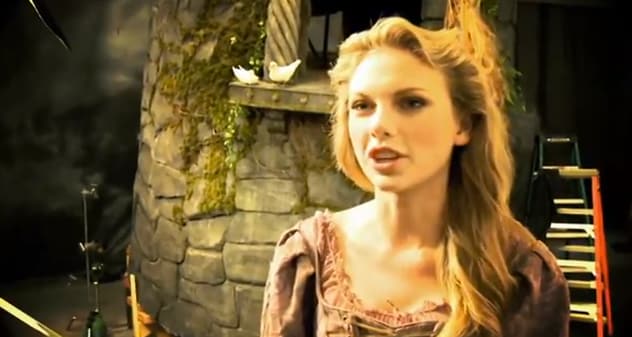 Disney Dream Portraits by Annie Leibovitz: Behind the Scenes with Taylor Swift as Rapunzel

Earlier this week, we revealed the latest Disney Dream Portrait by Annie Leibovitz for Disney Parks. Today, we go behind the scenes of the photo shoot with Taylor Swift as Rapunzel.

Last June, just a few days after the grand opening celebration for Cars Land, I found myself in Culver City, Calif., on a small soundstage right next door to where they shot “Gone With the Wind.” A large tower had been constructed on one side of the soundstage and a set of the interior of the tower on the other. Annie Leibovitz and her team of artists and technical wizards had created these magical settings for our latest Disney Dream Portrait.

Soon, Taylor Swift arrived and the real magic began as these two artists began experimenting with different poses and props to bring this moment of Disney fantasy to life. In the end, the interior set was not used for the final image, but as with the character who inspired this portrait shoot, exploring the world of possibilities was the theme of the day.

In this video, come behind the scenes, see the creative process unfold, and hear from Taylor herself what it means to be a part of this iconic series.

Take a look back at previous behind-the-scenes stories from the Disney Dream Portrait series:

Likes (0)
Share Disney Dream Portraits by Annie Leibovitz: Behind the Scenes with Taylor Swift as Rapunzel