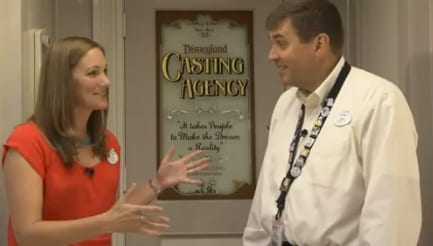 One of the things I love the most about Disneyland is its rich history. Working in Walt Disney’s original Magic Kingdom, you learn something every day about the park’s storied past, which is something that Jon Storbeck, vice president of Disneyland park, knows very well. Jon began his career with the Disneyland Resort in 1983 as an attractions host in Fantasyland. Since then he has held a variety of leadership roles in both Disneyland and Disney California Adventure parks. Today, with nearly 30 years of experience at the Disneyland Resort, Jon oversees the daily operation of Walt Disney’s very first theme park.

Jon has a passion for Disneyland along with its rich history and traditions, and I’m excited to tell you that Jon will be joining us as a regular author here on the Disney Parks Blog very soon, sharing a historical series about the Windows on Main Street, U.S.A. This tradition was started by Walt Disney as a way to honor the men and women who were instrumental in the planning, design, construction and operation of Disneyland.

“I have always been fascinated by the Windows on Main Street and I want to share the stories and inspiration behind them,” Jon told me. “The windows are like the credits of a movie. There are real stories and real people that helped Walt Disney build Disneyland initially and then there are stories about people who carried on that tradition many years later and earned what we consider to be the highest honor a cast member can get here at Disneyland, and that is a window on Main Street.”

Be sure to check back soon for the first of many in-depth looks at the Windows on Main Street, U.S.A., from Jon here on the Disney Parks Blog.