I’ve mentioned in a previous article how I think 2013 will be a lucky year. This notion rings true if you are an Oswald the Lucky Rabbit fan, especially with the release of two new timepieces from Disney Theme Park Merchandise. I love watches, as previously shared on the Disney Parks Blog (those retro-style Mickey Mouse watches are still some of my favorites)! Imagine my excitement as I spoke with merchandiser Tina David in the timepiece showroom about these new items. 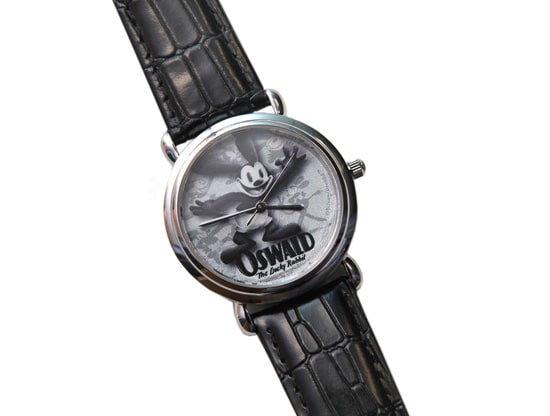 “We have two new watches with Oswald the Lucky Rabbit arriving in early 2013,” said Tina. “They join a great assortment of unique timepieces from Disney Parks. One watch is part of the Artist Watch Program, while the other is a new pocket watch inspired by Oswald’s Service Station at Disney California Adventure park. I think it’s great when we can feature characters that guests enjoy.”

Disney show artist Jason Zucker created the artwork for the limited edition watch arriving in early February. The watch will have an edition size of 150, and will include a watch face artwork print with an individually numbered certificate. Once released, look for the watch at Fortuosity in Disneyland park, or at Uptown Jewelers in Magic Kingdom Park and Art of Disney in Downtown Disney Marketplace at Walt Disney World Resort. There are no plans to sell this watch on the Disney Parks online store. 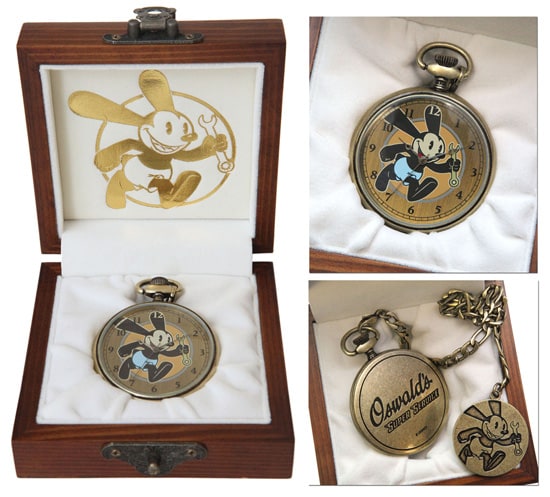 The pocket watch is due for release at the end of April. If you have been to Buena Vista Street in Disney California Adventure Park, you may recall seeing similar artwork used on merchandise at Oswald’s Service Station. The watch will have an edition size of 150, and will be released at Elias & Company and Off the Page in Disney California Adventure Park. The Disney Parks online store won’t carry this watch either, so here is the item number for my fellow pocket watch fans – 400007243682.

Stay tuned for a future Disney Parks Blog article about several beautiful new watches you will see this spring. But that is a story for another “time” (I’m here all week, folks).