Storytelling at the Royal Theatre in Fantasy Faire, Opening March 12 at Disneyland Park

We’ve been giving you peeks into the new Fantasy Faire coming to Disneyland park here on the Disney Parks Blog, and today, I’m pleased to let you know that this area will officially open for guests on March 12.

One of the highlights of Fantasy Faire will be the Royal Theatre, where you’ll be treated to two unique shows relating the tales of “Beauty and the Beast” and “Tangled,” as told by a pair of Renaissance Storytellers, Mr. Smythe and Mr. Jones.

Messieurs Smythe and Jones are men of the theatre and lovers of legend and lore. The storytellers present the tale as old as time and the hair-raising tale of Rapunzel, with the assistance of some fellow villagers, all to the musical accompaniment of Sir Samuel of Morocco. Even Belle, Rapunzel and Flynn Rider appear onstage to help tell their own stories.

“We’re using our imaginations to create these stories,” said Show Director Chris Utley. “The storytellers will play a variety of roles, filling in as the other characters. They may put on a costume accessory to pretend to be Beast, or Gaston or Mother Gothel. ” 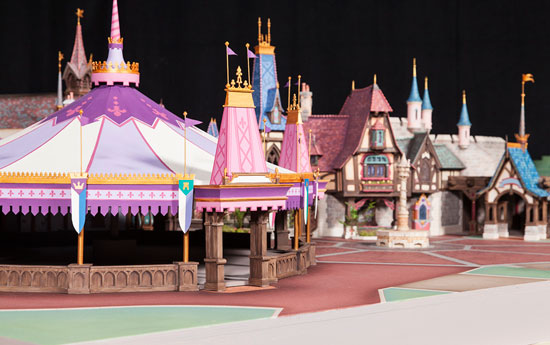 “The stories are told in a fast-paced, whimsical kind of way – very fun and theatrical,” said Chris. “It’s kind of a Renaissance vaudeville style, and the two guys are reminiscent of the old comedy duos of Gallagher & Shean, Abbott & Costello and Laurel & Hardy. They tell their stories with a lot of humor and heart.”

The storytellers will take to the stage of the Royal Theatre when Fantasy Faire opens on March 12.

For more Fantasy Faire news, read the posts below: