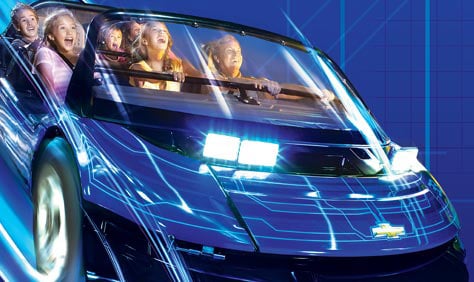 If you’re a frequent Walt Disney World Resort guest, chances are pretty good that you’ve taken more than a few spins around the exhilarating course of the Test Track attraction at Epcot. But no matter how many laps you’ve logged on this popular ride, we guarantee that you’ve never experienced anything quite like the re-imagined Test Track Presented by Chevrolet.

The result of The Walt Disney Company’s more than 30-year business relationship with the General Motors Corporation, this re-imagined version of the popular attraction combines the design aesthetics of Chevrolet automotive engineers with the storytelling expertise of Walt Disney Imagineering — including Assistant Project Manager Melissa Jeselnick.

For Imagineers like Melissa, who previously worked on such high-profile projects as Star Tours — The Adventures Continue and Toy Story Mania!, it’s all about the story. So when she tells us that the updated Test Track is one sweet ride, we know it’s not just idle talk.

In addition to the attraction’s new-look exterior (bold blue replaces the familiar yellow-and-black checkerboard pattern) and sleek marquee, there are some big — and very exciting — changes inside. We asked Melissa about the inspiration behind this ambitious project, and here’s what she told us:

“The original Test Track focused on crash testing and safety in terms of automobile prototype evaluations,” she explained. “But as the vehicle industry evolved, we decided to go back and explore a new story that reflects these evolutions. As a result, this iteration of Test Track celebrates vehicle design and an optimistic view of the future.”

The emphasis on the design phase is evident from the moment you set foot inside the attraction’s redesigned queue. What was formerly a testing workshop has been transformed into the sleek Chevrolet Design Center at Epcot, complete with sketches, cars and models supplied by Chevrolet.

It’s in this interactive design studio that you get your big chance to play automotive designer. Through a series of selections — including body color, tires, etc. — you create your own virtual custom-concept vehicle, then put it to the test while you’re on the track. And that’s the part of the experience that Melissa is especially revved up about!

“The coolest thing about the re-imagined Test Track is how involved our guests get to be in the attraction,” she said. “Not only do they get to design and style their own vehicle, they get to have it follow them through the attraction — and even into the post-show.”

How does that work, exactly? Well, after you design your vehicle, you climb aboard a six-person SimCar ride vehicle and hit the track — a course filled with hills, hairpin turns, straightaways and switchbacks — racing along at speeds up to 65 mph!

As you ride, your concept vehicle is scored in the areas of Capability (how it handles terrain and weather conditions), Efficiency (its environmental footprint), Responsiveness (maneuverability) and Power (speed). When you’re done, you can see how your concept vehicle scored against other guests’ designs, race it on a virtual track and even produce and star in a TV commercial for your new creation. As Melissa pointed out, “Ultimately, it’s about putting our guests at the center of the action.” And Test Track definitely does that!

So, what goes into creating an attraction as cool and cutting edge as the new Test Track? Well, if you ask Melissa, she’ll tell you that it takes more than state-of-the-art technology — it takes a dedicated team of incredibly talented people to make this kind of Disney magic.

“One of the great things about working for Walt Disney Imagineering is the people,” she said. “We have more than 140 different disciplines — and it took every one of them, plus the talents of our partners at Chevrolet, to create this amazing guest experience.”

If you haven’t yet checked out the re-imagined Test Track, you’ll want to experience it soon. If you have been to it, chances are that it’s become a must-do on every Walt Disney World Resort vacation. Either way, we think you’ll agree…a victory lap is definitely in order for Melissa and the whole Test Track team.