We’ll be celebrating the upcoming release of “Oz The Great and Powerful” when the “Journey to Oz Balloon Tour” floats into the Disneyland Resort on February 17. Part of a multi-city tour sponsored by HSN and IMAX Corporation, the tour kicks off February 12 from the Walt Disney Studios lot in Burbank, Calif. 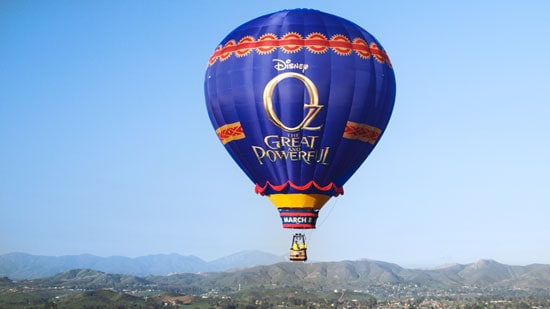 Before visiting the Disneyland Resort, the balloon tour will appear at the “Oz The Great and Powerful” premiere at the El Capitan Theatre in Hollywood on February 13. After it departs the Disneyland Resort, the tour will stop at the Daytona International Speedway in Daytona Beach, Fla., on February 20 and at Central Park in New York City on March 5-6.

Fans can also unlock screenings of the film in cities near them through the “Journey to Oz Balloon Tour” app, which launches on Facebook.com/OzTheGreatAndPowerful on February 15. And don’t miss “Oz The Great and Powerful” when it opens in U.S. theaters and IMAX on March 8!