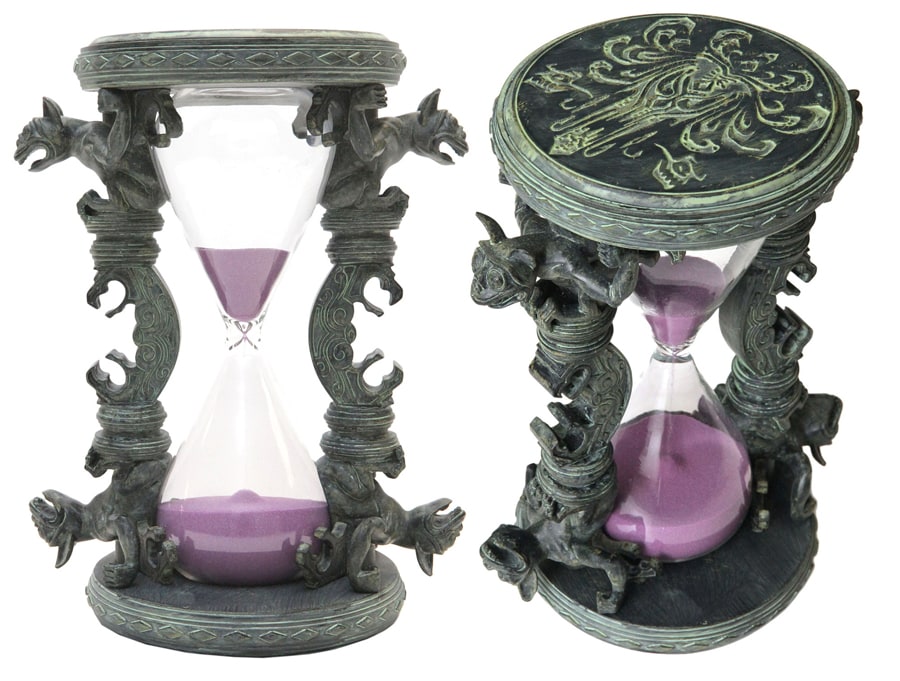 My love for the Haunted Mansion attraction at Disney Parks grows more and more each year. Granted, my mother will probably remind me that I first rode the attraction with my eyes closed (I was seven at the time). Since then, my eyes have been opened to the awesomeness of this classic Disney attraction. The home and décor team at Disney Theme Park Merchandise recently created some new Disney Parks authentic merchandise inspired by the attraction’s amazing details. I caught up with Cody Reynolds, a creative manager at Disney Design Group, who shared some insight into these nine new items.

The Hourglass
“I’ve wanted to make an hourglass for years,” said Cody, who is an 18-year Disney cast member. “This 7 ½-inch-tall hourglass has gargoyles from the stretching room and the famous wallpaper design on the top. White sand is more commonly used in hourglasses, yet we chose purple sand to match the overall color palette. The hourglass keeps track of about an hour.”

Candelabra
My favorite item is the candelabra, which also features a gargoyle. Cody said the base was inspired by the paneling found in the queue just after the stretching room.

Frame
The frame holds 5”x 7” photographs and is reminiscent of the plaque from outside the attraction. Cody said the merchandise looks so authentic because the “development teams took lots of photos inside the attraction early one morning.”

Music Box
“We needed a music box because music is an important part to the attraction,” explained Cody. “This music box plays ‘Grim Grinning Ghosts,’ and draws inspiration from Madame Leota’s tombstone outside the attraction. Her epitaph is included on the inside lid.” 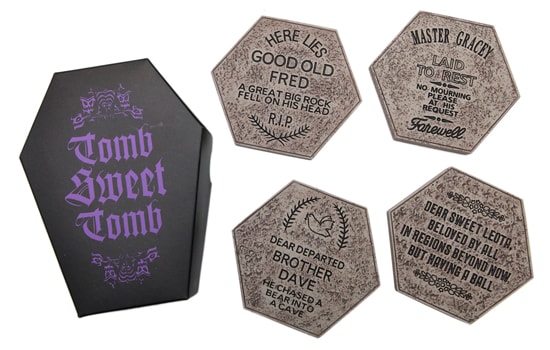 Coaster Set
The four-coaster set also uses some of the more recognizable epitaphs from the outside graveyard, including those of Madame Leota and Master Gracey.

Pillow and Throw
“For the pillow, we considered using the chair design from the endless hallway scene,” continued Cody. “Yet we selected a simple black pillow with the phrase ‘Rest in Peace.’ The back of the pillow and the throw include the famous wallpaper design.”

Candy Dish
The candy dish also uses the wallpaper motif, along with the iconic phrase “Room for One More,” which is a nod to the ghost host inviting guests to join the 999 happy haunts that live in the mansion.

Tarot Cards
Cody mentioned the tarot card-like hangtags found on the items were inspired by Madame Leota’s cards. The purple card contains verbiage that sounds like how Madame Leota would describe the new merchandise. The cards also contain nods to details found inside and outside the attraction.

These items will be found in select locations at Disneyland and Walt Disney World Resorts. We will also be carrying them via the Disney Parks online store at a future date. I’d love for all of these items to follow me home!