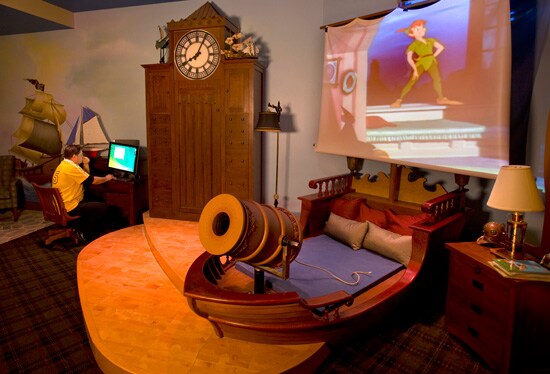 Off to Never Land in Innoventions at Disneyland Park

Anyone who knows me knows I love Peter Pan. He was one of the first Disney characters I remember as a little girl. Who didn’t want to fly to Never Land and hang out with Peter, the Lost Boys and Tinker Bell? It’s hard to believe this timeless classic celebrated its 60th anniversary this month – a milestone that is being marked with the release of the “Peter Pan” Diamond Edition on Disney Blu-Ray and HD digital.

Here at the Disneyland Resort, you can board a pirate ship and fly through Never Land on Peter Pan’s Flight in Fantasyland. You can also experience the magic of “Peter Pan” inside the Younger Son’s Room at the Innoventions Dream Home in Tomorrowland. The bed is shaped like a pirate ship and the cannon attached shoots virtual cannon balls through virtual clouds, just like the cannon on Captain Hook’s ship. The sail also shows clips from the film, “Peter Pan.” And keep your eyes open, because you may even spot Tinker Bell! Come see this magical room for yourself and celebrate the 60th Anniversary of Disney’s “Peter Pan” with us this weekend, here at Disneyland park.