The Walt Disney World Pro Soccer Classic is back and it’s the ideal place to get up close and personal with some of the top pro soccer teams in the nation. The fourth annual preseason soccer tournament kicks off at the ESPN Wide World of Sports Complex today, and we’ve got some new and exciting changes to share. 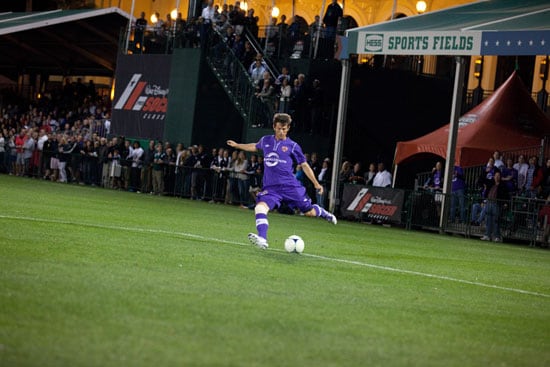 For the first time in the tourney’s four-year history, the field will include six Major League Soccer clubs – D.C. United, Philadelphia Union, Sporting Kansas City, Columbus Crew, Toronto FC and Montreal Impact – along with the United Soccer Leagues’ Orlando City Soccer and the North American Soccer League’s Tampa Bay Rowdies. With six MLS franchises in the field, this is the largest contingent of MLS teams competing in a pre-season tournament in the country.

Also, for the first time this year, the tourney will feature four event days – today, Wednesday, February 16 and February 23. And unlike some of the more cavernous soccer stadiums in MLS, the beautiful open fields at the complex are the perfect, intimate setting to watch these world-class athletes train and compete. Fans can get autographs and photos of players as they walk on and off the field after soccer matches.

Even if you don’t follow soccer, this is a great chance to get a close up view of some of the most storied franchises in the MLS. For instance, D.C. United is a four-time MLS Cup champion and Sporting KC will represent the MLS in the 2013-14 CONCACAF Champions League.

The Pro Soccer Classic championship game is Saturday, February 23 at 8 p.m. Tickets can be purchased at all Ticketmaster outlets and at the sports complex box office or by calling 407-949-GAME (4263).

If you can’t make it out to the complex for the games, check out the action online, as all games will be streamed live on MLSsoccer.com (except for the semifinals and the championship game, which will be shown on ESPN3.com).