A Pair of All-Stars: Mickey and ‘The Kid’ at ESPN Wide World of Sports at Walt Disney World Resort

Mickey is no stranger to kids, especially those visiting Walt Disney World Resort. Today, however, was a special occasion as “The Mick” met “The Kid.” 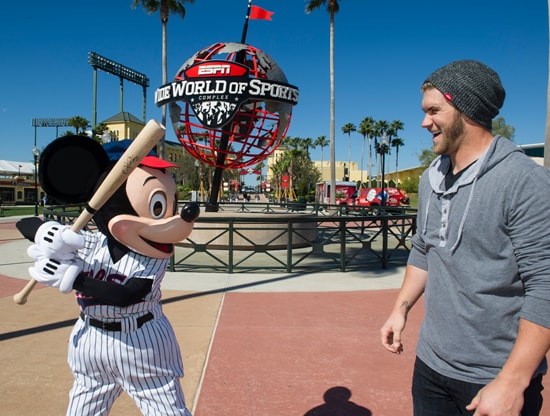 On his way to the Magic Kingdom, the National League all-star Bryce Harper stopped by ESPN Wide World of Sports to receive a couple of hitting tips from Disney’s favorite all star. (Disney Parks Blog author and photographer Gene Duncan was on hand to capture this highlight).

Of course, if his first year in the major leagues is any indication, Bryce doesn’t need many tips. Last Friday night, Harper showed off his natural hitting prowess with a spring training home run against the Atlanta Braves at Champion Stadium. In the video below Bryce also talks about how this wasn’t the first success he tasted at Disney’s sports complex; he also played here as a youth on a handful of occasions for USSSA tournaments.

Likes (0)
Share A Pair of All-Stars: Mickey and ‘The Kid’ at ESPN Wide World of Sports at Walt Disney World Resort