One of Mickey Mouse’s favorite things about Star Wars Weekends is that he gets to dress in his Jedi best and join the galactic fun. Each year, Mickey seems to take on a different role in the official “Star Wars” Weekends logo. This year, his imagination takes him to the Forest Moon of Endor, where he is seen zipping away from scout troopers with Chip and Dale. Mickey’s wild speeder bike ride on this year’s artwork has historical significance, as 2013 marks the 30th anniversary of “Star Wars: Episode VI Return of the Jedi” — the film that featured the Battle of Endor. 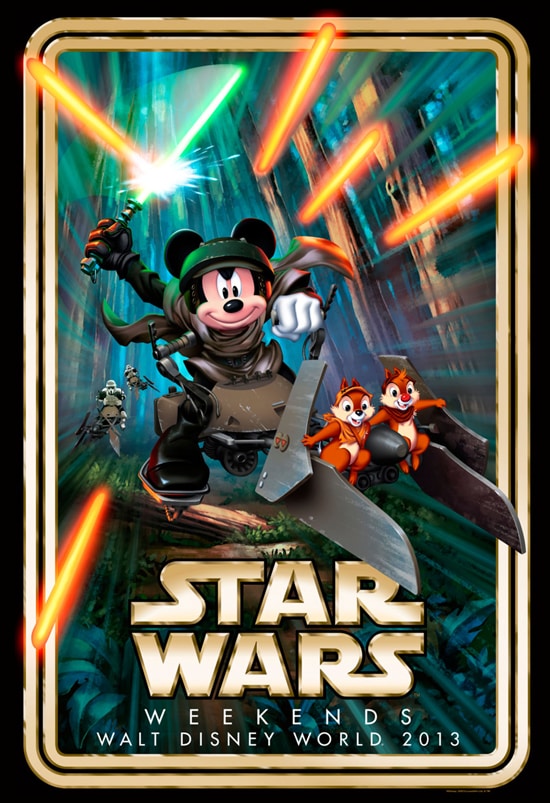 In addition to unveiling the logo for this year’s event, we’re excited to announce a pair of celebrity appearances for Star Wars Weekends 2013 at Walt Disney World Resort, with two legends from the saga doubling the fun in two consecutive weekends.

Action star Ray Park, who portrayed the Sith warrior Darth Maul on the silver screen, will be one of the celebrity guests in Weekends I and II. Actor Warwick Davis, known to Star Wars fans as everyone’s favorite Ewok, Wicket W. Warrick, will be one of the guests during Weekends II and III.

More Star Wars celebrities will be announced soon, so be sure to program your droids to scan the Disney Parks Blog and StarWars.com, as well as DisneyWorld.com/StarWarsWeekends for updates.

Star Wars Weekends takes place at Disney’s Hollywood Studios every Friday, Saturday and Sunday from May 17-June 9, 2013. Most event activities are included in regular park admission.