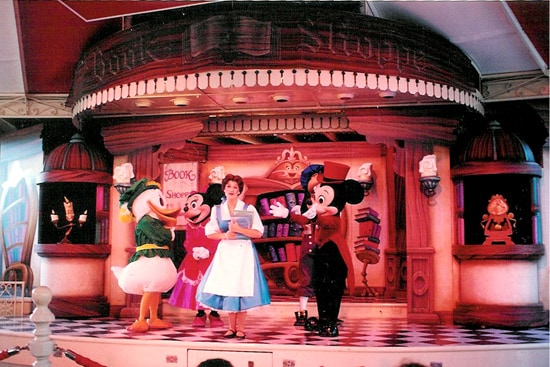 One of the things I love about Disney’s “Oz The Great and Powerful“, which opens nationwide in theaters today, is how the citizens of Oz worked together to make magic happen.

Finley, China Doll, Tinkers, the Quadlings, and others are characters you may not recognize now but will soon seem like old friends. They, along with beloved Ozians like the Munchkins, make a difference, regardless of their size or the size of their contribution. While those in power may boldly lead, inspire and make heady decisions, every person everywhere may also affect the world in a positive way as well. (It was one of the messages in Steven Spielberg’s “Lincoln”, too.) Some people can change entire “worlds” in a more literal way. Art director Arte Contreras created magical settings for Disney Parks years before he was selected to be one of the two assistant art directors for “Oz The Great and Powerful”, led by Production Designer Robert Stromberg (two-time Academy Award winner for Disney’s “Alice in Wonderland” and James Cameron’s “Avatar“).

While studying architecture in college, Arte met and worked with his mentor, Eddie Martinez Sr. A retired Imagineer who helped design Epcot, Eddie’s many accomplishments include painting the portrait of Walt Disney with his characters, which became a U.S. postage stamp. “Eddie took me under his wing,” said Arte, “and introduced me to his friend and mentor Herbie Ryman – a Disney Legend and one of the original Disneyland park designers.

“Both Eddie and Herbie worked with, and were mentored by, the great John DeCuir Sr., three-time Academy Award-winning Production Designer for numerous movie classics, such as “The King and I”, “Cleopatra” and “Hello Dolly!”, I feel blessed and fortunate to be associated with such a talented legacy.”

Arte’s prior realization of believable yet fantastic places in Disney Parks was one of the reasons he is a perfect fit in Oz. When he was with Walt Disney Parks and Resorts Creative Entertainment as an art director, he designed Disneyland Resort parade floats and Disney Afternoon Avenue, which was the precursor to Mickey’s Toontown. He worked on live shows as well, including “Belle’s Bookshop” – a show pre-dating the Broadway musical – and was involved with the design of Fantasmic!

After working in Walt Disney Imagineering on designs for Disney California Adventure park, Tokyo DisneySea and Buzz Lightyear Astro Blasters at Magic Kingdom Park, Arte’s career took him to other entertainment venues, live shows and the Emmy-nominated Disney’s Greatest Hits on Ice. “There is something special about doing a project for Walt Disney Pictures that takes place in a fantastic place like Oz,” Arte said. “I prefer doing things that lean toward fantasy. It allows you to take existing architectural styles and artistic motifs and add flares of individuality.”

“When I joined the Oz production, a lot of the sets had already been fleshed out. Rob started out with an affinity and appreciation for Walt Disney’s original classics. We went to The Walt Disney Archives to see the actual animation artist’s cel paintings from “Dumbo“, “Pinocchio“, “Snow White and the Seven Dwarfs” and others. This was the inspiration we used to create much of the fantastical world of Oz. 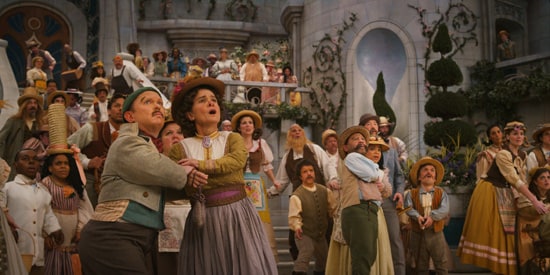 As art director on Glinda’s courtyard, for instance, I oversaw all construction and made sure we had the right colors and textures, as well as a lot of ornamental detail that accentuated and complimented Glinda’s character. Rob envisioned the courtyard as an iridescent, art nouveau French chateau that reflected her strong yet feminine personality. I sketched a lot of doors, railings, topiary and other architectural and sculptural details.”

Arte and his team created scale models of each set once a design was approved. The graveyard was a large model,” he recalled. “It’s an American Victorian hybrid with the flare of Tim Burton (whom Rob had worked with on “Alice in Wonderland”). When I was designing the gates, the tombstones and the entry gargoyles, I used Alice and the Haunted Mansion attraction as my inspiration.”

Tinker’s was the third main set that Arte was asked to design and art direct. “This set appears toward the end of the film, in which a plan is formulated to save the Land of Oz from evil,” he said. “The setting has an intricate and mechanical theme. This set brought to light an interesting coincidence – Rob and I found out that we worked together on a project in 1993 and never knew it. He said, “I want you to design Tinker’s and I want it to look like that project we did 100 years ago with heavy wood grain, kinetics—turning cogs, gears and pipes – with a Disney-like Fantasyland feel.”

During the filming of “Oz The Great and Powerful”, people would come up to me on Glinda’s courtyard set and say, ‘This feels like a Disney Theme Park!’ I would smile at the compliment, giving credit to my Disney roots – this background that helped me channel that Disney magic to a very magical Disney film.”