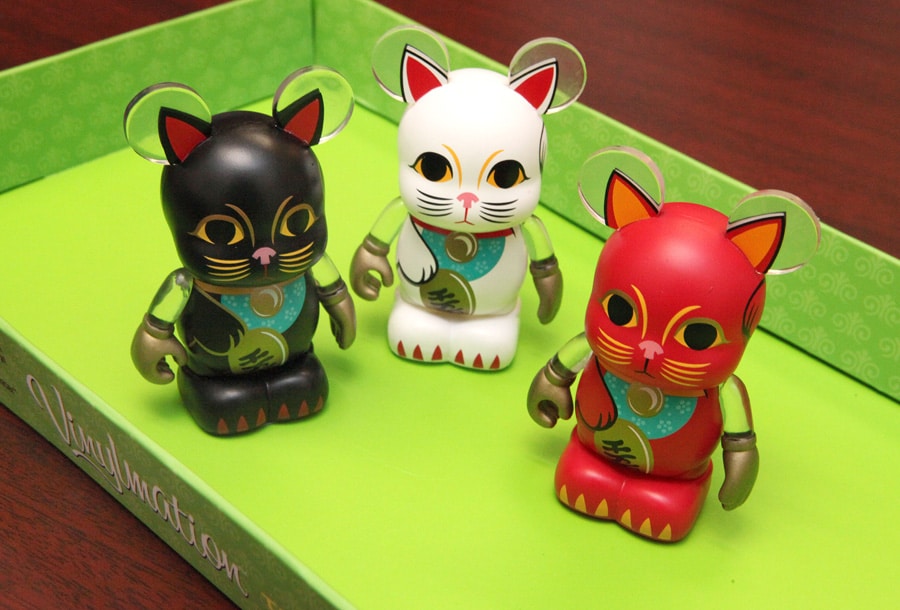 A few weeks ago, I shared a glimpse at some exciting changes planned for Vinylmation. One of the first series the team addressed dates back to the very beginning of Vinylmation – the Urban series. This graphic focus series allows Disney artists to express their individual art styles on figures shaped like Mickey Mouse. I met with Disney Design Group artist Thomas Scott to learn about the new direction for this series.

“We began considering enhancements to Vinylmation in early 2012,” explained Thomas. “We released nine different Urban series in the past four years, but felt it was time for change. We titled this new series ‘Urban Redux,’ as we wanted a fresh start. We kept some of the great elements like strong visual graphics and whimsy, and added some new things we think collectors will love.” The first noticeable thing is the tray now consists of eight boxes, not 24 as previously featured. Each tray will contain at least one of each of the five known designs shown on the packaging. The tray will also contain at least one of the following three figures – a “mystery” chaser, a variant figure or a super mystery chaser. Odds are also now featured on the individual boxes which indicate your chances of finding a particular figure. These changes mean that a tray may not contain a mystery chaser figure like before.

“We wanted the strongest possible designs for these smaller collections,” Thomas continued. “The smaller series will give our fans the ability to complete a series faster. We also added fun surprises to Urban Redux, like a small number of figures hand signed by the artists that we mixed into the trays.”

I asked Thomas if those autographed figures were considered the super mystery chasers. Smiling, Thomas said they were not such figures. Rather, they were something very unique and something we’ve not done before for a mystery series.

This new series will be released on March 22 at D Street in California and Florida. The series will launch on the Disney Parks online store on March 25. We are holding a special release party on Friday, March 22 from 5:00 p.m. to 7:00 p.m. at D Street in Downtown Disney West Side at the Walt Disney World Resort. There, you can meet the Disney artists behind this new series, including Thomas Scott, Maria Clapsis, Billy Davis, Caley Hicks and Monty Maldovan.

For more news on Vinylmation, read the posts below: