We’ve had some exciting news on the baby front over the past couple of weeks at Disney’s Animal Kingdom, with a first chick for a pair of Saddle-Billed storks, and a new addition to our White-Cheeked Gibbon family. 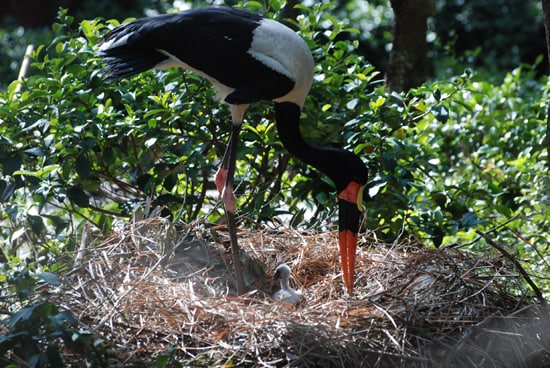 Not only is the Saddle-Billed Stork chick a first for these parents, but it is a first for Disney’s Animal Kingdom. The pair has been together since 1998, the year Disney’s Animal Kingdom opened, and they have gradually improved the skills needed to be parents, including courtship and nesting.The Saddle-Billed Stork is an exceptionally tall and spectacular-looking stork, with a yellow saddle-shaped shield on its bill that gives the bird its name. Their native habitat is tropical Africa, where they eat mainly fish. Guests can see the nest and chick in the Ituri Forest area of the Kilimanjaro Safaris.

Guests also are enjoying watching the baby White-Cheeked Gibbon in the Asia near the entrance to the Maharajah Jungle Trek, along with the rest of the gibbon family, which includes mom, dad and the baby’s big sister and big brother. You may think you are looking at two different kinds of apes when you see the gold and the black gibbons, but you are actually seeing a female and a male. The babies are born gold to blend in with mom and then change color around one year old. The males stay black, but the females will change back to the gold color when they are sexually mature. We don’t know the sex yet of the baby gibbon, or of the Saddle-Billed Stork chick. White-Cheeked Gibbons can be found in the canopy of the tropical rainforests of Laos, Vietnam and southern China. 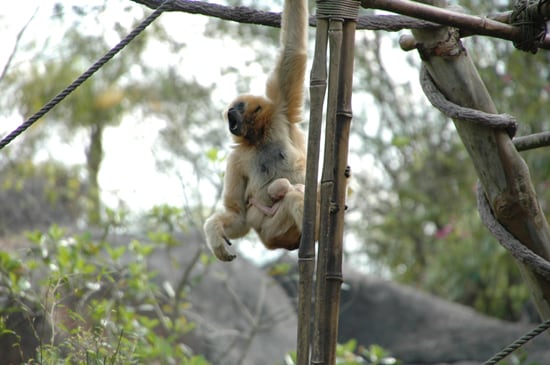 Check out these posts for more news from Disney’s Animal Kingdom: