Fantasyland is the most magical land of them all – the heart and soul of Disneyland. It is a place of endless enchantment, where it’s always “happily ever after.”

On March 12, Fantasy Faire will make its debut at Disneyland park as a natural extension of Fantasyland. Here, guests will be immersed in a charming European village inspired by their favorite Disney stories as they meet beloved Disney Princesses in a setting befitting royalty. Ken Anderson worked as an animator and art director on many of the Disney films portrayed in Fantasyland. He was also a trained architect, which made him the perfect person to transform film environments into three-dimensional attractions. Anderson’s work on the original Fantasyland in 1955 and his continued efforts on the “New Fantasyland” in 1983 were instrumental in defining the style of Fantasyland that has been the heart of Disneyland since opening day.

Anderson began his Disney career in 1934. Walt Disney referred to him as his “Jack of all trades” because of his masterful skills as an architect, artist, animator, storyteller and designer. Anderson worked on the experimental “Silly Symphonies” before serving as an art director on “Snow White and the Seven Dwarfs.” He had the uncanny ability to wiggle his ears, a characteristic he bestowed upon the endearing dwarf, Dopey. He also worked on “Pinocchio,” “Alice in Wonderland” and contributed technical innovations for mixing live-action with animation in “Song of the South.” He later improved upon this technique while serving as an animation art director for “Pete’s Dragon.”

In the early 1950’s, Walt recruited Anderson to work on a new project – one that was secret at the time. Anderson joined WED Enterprises (now Walt Disney Imagineering) and he became one of the first to work on Disneyland. In 1954, he was the primary designer of Fantasyland. He worked on Peter Pan’s Flight, Snow White’s Adventures and Mr. Toad’s Wild Ride. After Disneyland opened, Anderson remained involved in Fantasyland while working on “Sleeping Beauty” at the Walt Disney Studio. Anderson oversaw the Storybook Land Canal Boats attraction, and in 1957 he worked on the Sleeping Beauty Castle Walkthrough.

Anderson went on to contribute show concepts for the Haunted Mansion and worked on the development of the Walt Disney World Resort and Tokyo Disneyland. He retired in 1978, but continued to work as a consultant for WDI. 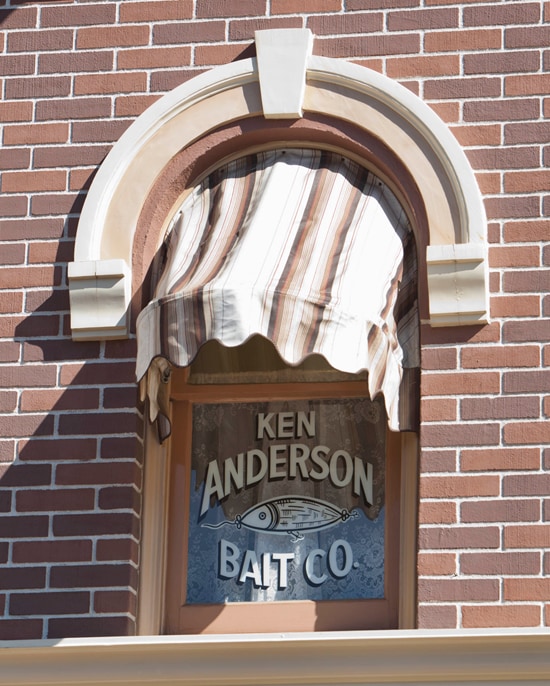 Anderson’s window on Main Street, U.S.A, is located above the Market House. He was an avid fly fisherman, and in jest the inscription names him proprietor of a bait company. This is ironic because fly fisherman typically do not use bait; they are catch-and-release fishermen. Anderson was named a Disney Legend in 1991.