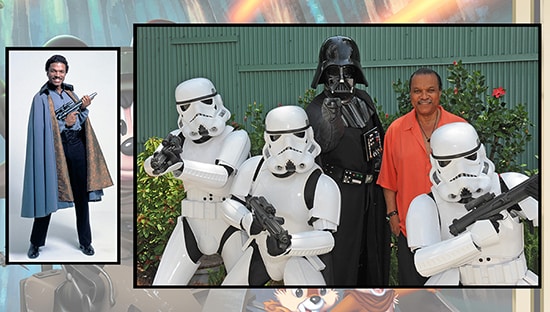 Today we’re pleased to announce that everyone’s favorite galactic smuggler, gambler and scoundrel will temporarily leave Cloud City and board the Millennium Falcon with a course set for Disney’s Hollywood Studios, as actor Billy Dee Williams returns to Star Wars Weekends for the 2013 edition.

Williams, a fan favorite for his portrayal of Lando Calrissian in the film saga, will attend Weekend IV, June 7-9, 2013.

Lando, who is described on his official StarWars.com bio as having two weapons of choice — a blaster pistol and “a devastating smile” — betrayed the Rebellion when he made a deal with Darth Vader to capture his old friend, Han Solo. However, there was a storybook ending to the tale when he redeemed himself by later helping to free Captain Solo and assisting in the destruction of the second Death Star.

If you make plans to attend Weekend IV, I definitely suggest attending one of the “Stars of the Saga” talk shows that features Williams. It was a highlight for me at past events to hear him tell tales about his portrayal of the suave scoundrel. But be sure to get there early; his appearances will most likely be a popular gathering place for members of both the Empire and the Rebellion.