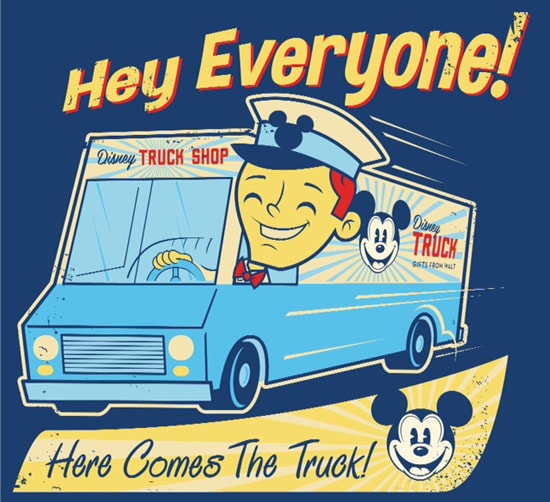 Erin Glover will have a special “Limited Time Magic” update especially for Disneyland Resort fans later today, but I first wanted to let you know about a “Limited Time Magic” offer beginning next week at Walt Disney World Resort and share a few quick updates from around Disney Parks.

For one week only, from April 8–14, the Disney Truck Shop (our newest shop on wheels) will be parked along the Downtown Disney Westside route, offering the chance to pick up a vintage-style limited release tee as part of “Limited Time Magic.”

The tees have been inspired by the design and logo from the Disney Truck Shop, and they’ll be available while supplies last at Downtown Disney.

And for Disney Parks Blog fans and readers in Canada, Breakfast Television, Toronto’s #1 morning show, will be broadcasting live from the Walt Disney World Resort on April 22 and 23, and the show is offering chances to see it all live. Visit the Breakfast Television site for details, but act quickly: today is the final day for entries. Also, we’re told that more Disney vacation giveaways will be revealed on Breakfast Television Toronto on April 22–23, and on Cityline, Canada’s longest-running daytime program for women, on April 23.

Beginning tonight, The Turtles featuring Flo and Eddie will be taking the stage at Epcot for the Flower Power Concert Series. A Flower Power concert is a “must do” during the Epcot International Flower & Garden Festival. You can find a full musical lineup in our earlier story.