For one day only, Disney’s Hollywood Studios will present a “Limited Time Magic” event for the annual, fan-proclaimed “Star Wars Day,” May 4 – a date that Star Wars fans worldwide turn into a celebratory pun, “May the Fourth Be With You!” 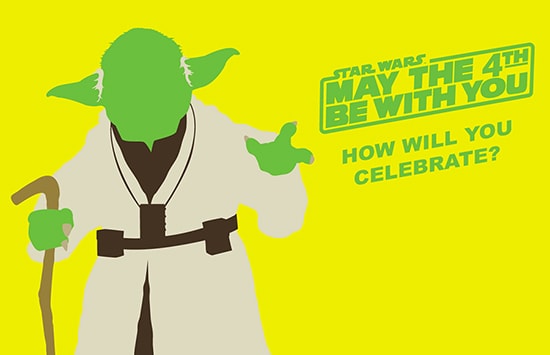 You might even find yourself sitting next to Chewbacca aboard Star Tours – The Adventures Continue. Star Wars characters will make surprise appearances on the 3-D attraction to enjoy the wild journey through space alongside park guests.

A special edition of Jedi Training Academy also is planned that day, with parents invited to join their children (ages 4-12, sign-ups required on first-come basis) on-stage for the training and final showdown with the Empire.

When the sun goes down, galactic fun lights the night as Lobot (from Star Wars: Episode V The Empire Strikes Back) takes over as DJ for a dance party that will be highlighted by a special Star Wars fireworks show.

“May the Fourth Be With You” “Limited Time Magic” park activities and shows are included in regular admission to Disney’s Hollywood Studios.