I recently spent a few hours at Disney’s Animal Kingdom Theme Park during a beautiful, sun-filled Florida morning. I was there taking photographs for a few articles I’m writing about the park’s upcoming 15th Anniversary. In spring 1998, I remember spending many weekends at the park taking photos with my old film camera (some things never change). At the time, there were so many new places to explore, and I tried to capture all of the details on film. As I passed through Island Mercantile during my most recent visit, I was reminded of those early days as I looked up to see a sky filled with animals. 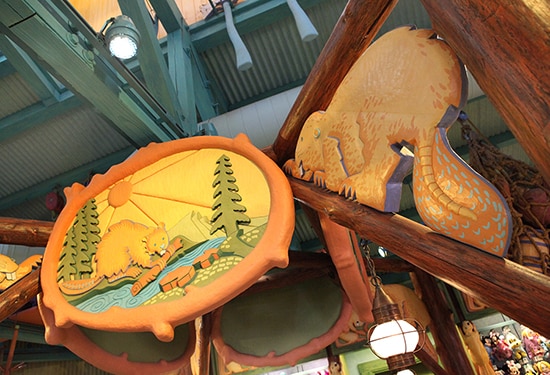 Island Mercantile is the largest merchandise shop at Disney’s Animal Kingdom Theme Park. Located in Discovery Island, every guest must pass by this location while traveling in and out of the park. The shop has nearly everything you would find in its sister locations like Emporium on Main Street, U.S.A., at Magic Kingdom Park or Mouse Gear at Epcot. Guests can find apparel, logo merchandise, home goods, toys, plush and much more. The location is also filled with some amazingly beautiful details found directly above the merchandise. 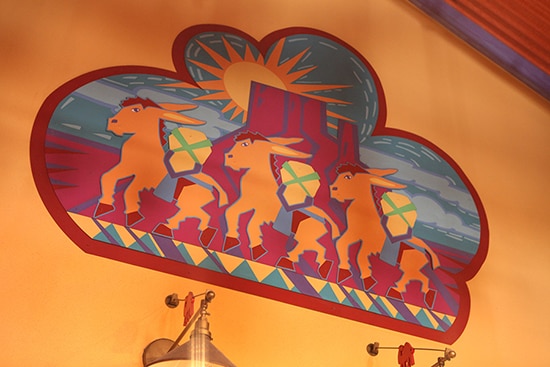 According to the exceptional book, “The Making of Disney’s Animal Kingdom Theme Park” by Melody Malmberg, all of the shops in the Discovery Island area salute the animal world with beautiful carvings, murals, fixtures and other adornments. Island Mercantile features animals that “migrate and work – whales and wildebeests, ants and bees.” Some of their fanciful designs were inspired by 1940s fruit-crate art. 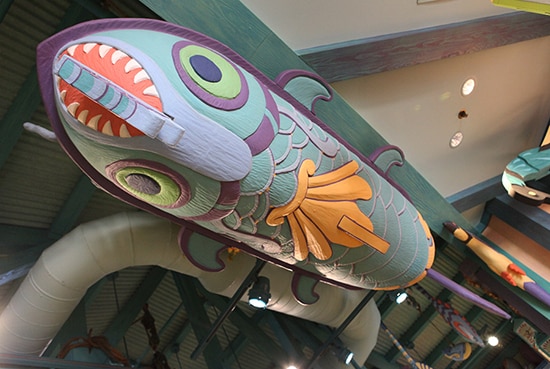 I’m most impressed with the magnificent wood carvings, which were carved and painted in Bali by expert craftsmen. I also love the little details like the beaver-chewed posts near registers, the donkeys in the desert mural, or camel silhouettes found on elegant hanging lamps.

Here are a few other animals I found inside the shop. I’d love to hear if you have a favorite detail from Disney’s Animal Kingdom. Please share in the comments below. You can also join the conversation about the park’s anniversary online by using the hash tag #DAK15 on Twitter.