I’m a big believer that good ideas can come from anyone. That’s why, when I got the green light to write for the Disney Parks Blog, I asked my co-workers to come to me with any story suggestions they had. (My theory is: if they think it’s cool, you will too!)

My friend Louis told me about the talents of a few cast members on our Guest Show Team. Not only do they keep Downtown Disney nice and tidy, they also entertain our guests with their amazing artistic skills. Take a look: 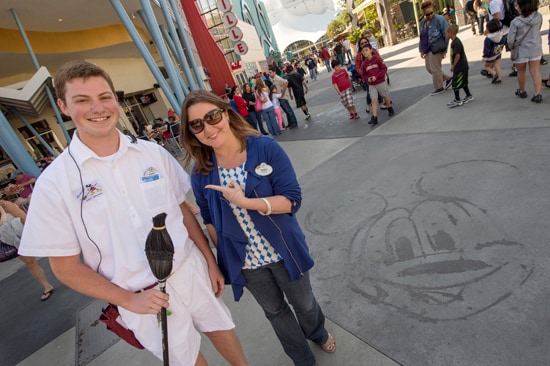 Hayes, featured above, is one of 15 or so cast members who has learned to “paint” Mickey, Minnie and other classic Disney characters using nothing more than his broom and water.

Hayes told me that it’s not uncommon for guests to gather around and snap photos of his work. I’ll admit, I was mesmerized watching him do this! Though I would have guessed he’d been doing it forever, Hayes has only worked at Downtown Disney since January. As part of the Disney College Program, he jumped at the chance to attend an optional training class to acquire this unique skill. (I think I would have too … if you ask me, it’s the ultimate “party trick”!)

The moral of the story is this: the next time you visit Downtown Disney, be on the lookout – that friendly custodial cast member you see just may be more than meets the eye!

Has a cast member ever dazzled you unexpectedly? Share your story in the comments below – I’d love to hear it!

(And if you want to be wowed by a daily dose of Downtown Disney news, follow us on Twitter at @WDWDowntown.)