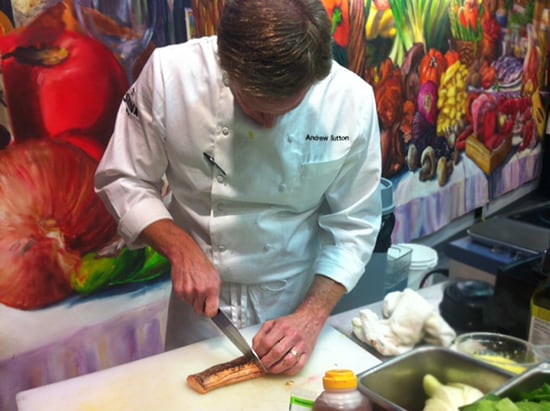 In a super-close competition, Chef Andrew Sutton from Napa Rose at Disney’s Grand Californian Hotel & Spa was edged out today by Chicago Chef Carlo Lamagna for top honors in the Skuna Bay Chef Challenge at the legendary “Taste of Derby” at the Kentucky Derby.

It’s a long road from Southern California to Churchill Downs Racetrack in Louisville, Ky., and Sutton started competing in March in North American regionals, sponsored by Skuna Bay Salmon. Thirty chefs entered their most impressive Skuna Bay salmon recipes, and Sutton was a regional winner. In April, the winning regional chefs went head-to-head in Round 2 in competitions in Los Angeles and Chicago. Sutton again was victorious.

The finals for “National Skuna Bay Craftsman Chef” were this week in Louisville, with Sutton going up against Chef Carlo Lamagna from Perennial Virant in Chicago. At each stage of the competition, Sutton crafted the same beautiful dish: an elegant, use-all-of-the-fish trio that included tangerine-cured salmon belly sashimi; a pan-roasted fillet with crispy skin on an English pea coulis, topped with house-cured salmon roe and Eureka lemon; and an escabéche featuring fresh salmon cut in perfect miniature cubes and tossed with cucumber, mint and cilantro. Each round started by breaking down and filleting a 10- to 12-pound Skuna Bay salmon. (Skuna Bay is along Vancouver Island, British Columbia, where waters are glacier-fed and the fish used in their feed is from sustainably certified fisheries.)

Along with competing in the prestigious culinary contest, Sutton gets a primo seat for Saturday’s Kentucky Derby.

He offered his winning creation at Napa Rose before the contest, practicing to get it perfect. And we bet you’ll find it back on the restaurant’s menu.