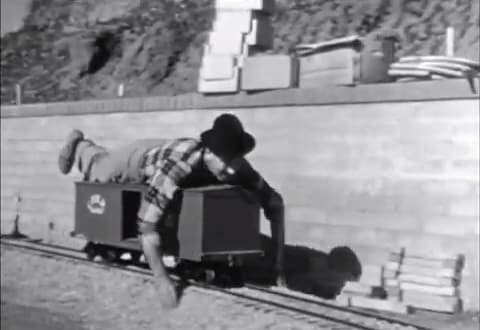 The Carolwood-Pacific Railroad, Inspiration for the Disneyland Railroad

“…I just want it to look like nothing else in the world. And it should be surrounded by a train.” — Walt Disney

Even before Disneyland Resort was built – when the idea for the theme park was still being developed – it was surrounded by its now-iconic railroad. Not only would it provide guests with a “grand circle tour of Walt Disney’s Magic Kingdom,” but it also would create a natural barrier between the outside world and the magical realms inside. This made the Disneyland Railroad one of the most important opening day attractions. So far, we’ve met some of the Steam Engines of the Disneyland Railroad, and today we’ll take a look back to a specific time in Walt’s lifelong love of trains and his inspiration for this beloved attraction. Believe it or not, he found this inspiration right in his own backyard …

In 1947, Walt bought a new electric train and wanted to show it off. He brought it over to Walt Disney Studios and knew exactly who to show it to: Ward Kimball and Ollie Johnston, the animators behind Jiminy Cricket and Thumper, and fellow train enthusiasts. He quickly learned that they each had impressive trains of their own – but theirs were big enough to ride in their backyards! So, of course, Walt had to have one of his own. A few years later, in 1950, he had the perfect spot for his train: the backyard of his home on Carolwood Drive. And it was 63 years ago this week that the first engine was steamed up on Walt’s own, personal ⅛-scale model railroad, the Carolwood-Pacific Railroad.

Take a look back as Walt tests out his Carolwood-Pacific Railroad in the footage below, which originally appeared in the 1956 television show, “Where Do The Stories Come From?”

At first, Lillian Disney, Walt’s wife, was not exactly excited about their brand-new backyard being taken over by a miniature railroad, so Walt wanted to do something special to make her comfortable with the idea. He enlisted the help of horticulturalists Jack and Bill Evans (who would later go on to cultivate the horticulture for the Jungle Cruise at Disneyland park) to create a beautifully landscaped backyard, and then even named the locomotive of his new railroad “Lilly Belle” in her honor. This kind gesture now lives on here at Disneyland; the Grand Canyon observation caboose which operates on the Disneyland Railroad is now lovingly referred to as the Lilly Belle.

If you’re interested in seeing this incredible piece of Disney history yourself, you can see the Carolwood-Pacific Railroad and the Lilly Belle at The Walt Disney Family Museum in San Francisco, Calif. It was one of my favorite moments in a day full of amazing moments at this remarkable museum. Also consider a visit to Walt Disney’s Barn – the actual barn from which Walt would monitor and remotely control the Carolwood-Pacific Railroad – now relocated to Griffith Park in Los Angeles, Calif.

The idea of having my own, personal railroad in my backyard sounds incredible. What would you name your own backyard railroad?

Likes (5)
Share The Carolwood-Pacific Railroad, Inspiration for the Disneyland Railroad