Wildlife Wednesdays: Does Crush Have Ears? Test Your Turtle Knowledge at Epcot and Disney’s Animal Kingdom

Turtles are fascinating creatures, and really cool dudes, too – just ask Crush! Although they don’t have visible ears, turtles, including sea turtles like Crush, do have eardrums covered by skin. They hear best at low frequencies, and their sense of smell is excellent. Sea turtles don’t have teeth, but their jaws have modified “beaks” suited to their particular diet. Their vision underwater is good, but they are nearsighted out of water. Their streamlined bodies and large flippers make them remarkably adapted to life at sea. However, sea turtles maintain close ties to land. Females must come ashore to lay their eggs in the sand, so all sea turtles begin their lives as tiny hatchlings on land.

Guests can find out even more about turtles and participate in a variety of activities for the whole family this month during two special events at Epcot and one at Disney’s Animal Kingdom. On May 18, The Seas with Nemo & Friends will observe Endangered Species Day with a special focus on sea turtles, manatees and coral reefs. And on May 23, both The Seas and Disney’s Animal Kingdom will celebrate World Turtle Day.

On Endangered Species Day at The Seas, guests can discover how all of us can help keep waterways safe for manatees, and talk with Disney’s Animal Programs scientists who are helping restore coral reefs in the Bahamas. On both Endangered Species Day and World Turtle Day, children can climb through a full-size model of a turtle excluder device, used on fishing boats to prevent sea turtles from getting caught in nets, among other activities. And, of course, every day, kids can ask Crush all about sea turtles at Turtle Talk with Crush. 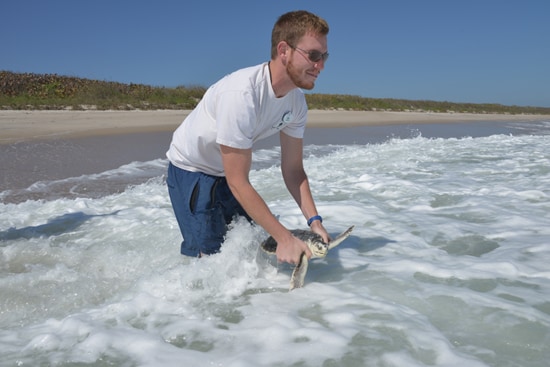 Of course, the teams at Disney’s Animal Kingdom and The Seas with Nemo & Friends celebrate and conserve turtles and tortoises every day. Over the years, our animal care team has nursed more than 320 endangered sea turtles back to health and released them back to the wild.

Guests at The Seas with Nemo & Friends, Disney’s Animal Kingdom and Disney’s Vero Beach Resort (which also participates each year in the Sea Turtle Conservancy’s Tour de Turtles) can help turtles by adopting a sea turtle nest. The adoption fee helps sea turtle conservation efforts in Florida through the Disney Worldwide Conservation Fund (DWCF). Guests receive an adoption certificate complete with the date of adoption, the date the nest was laid, the species of sea turtle, and the nest number; a Squirt keychain; and a Disney Worldwide Conservation Fund hero button. Since its inception in 1995, the DWCF has contributed more than $1.1 million to sea turtle research around the world, including here in Florida.

All of us can help turtles and tortoises by taking action to reduce, reuse and recycle, by making sure that we dispose of trash properly, by becoming wildlife-friendly shoppers, and by observing turtles and other wildlife from a safe distance, taking care not to disturb them or their habitats.