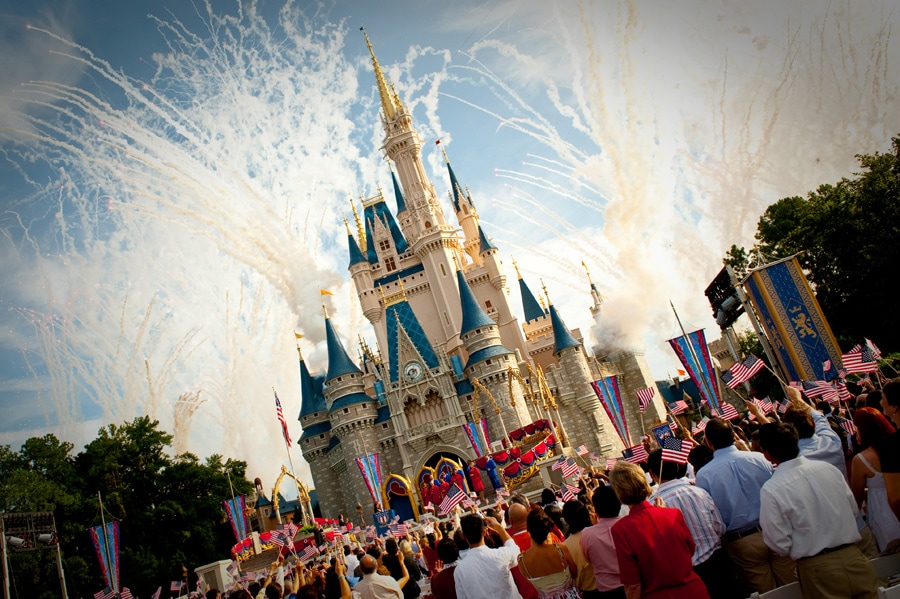 No need to wait until July Fourth to celebrate America’s birthday at Disney Parks – we have seven days of “Limited Time Magic” surprises planned for the entire Independence Week (July 1-7), including nightly fireworks spectaculars at Walt Disney World and Disneyland Resorts. And today, we have new details to share with blog readers. 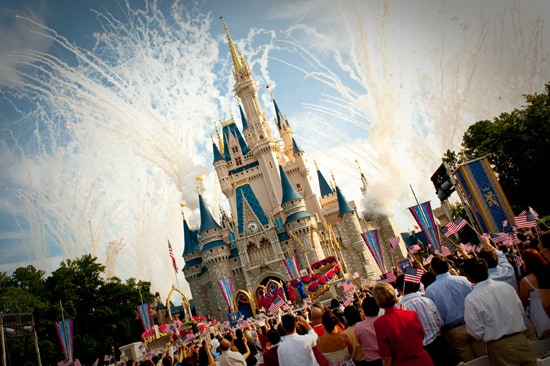 At Walt Disney World Resort, the July Fourth fireworks spectacular will rocket into the air above Cinderella Castle every night with “Disney’s Celebrate America! A Fourth of July Concert in the Sky.” The dazzling display at Magic Kingdom Park will be orchestrated to an upbeat musical tribute to America as patriotic lighting covers the Castle.

Walt Disney World Resort guests will also be treated to a fun-filled spectacle as Goofy, Donald and Pluto, dressed as a colonial fife and drum corps, join a spirited procession down Main Street, U.S.A, prior to the daily Celebrate a Dream Come True parade at Magic Kingdom Park. The pre-parade features the Main Street Philharmonic, Citizens of Main Street and Walt Disney’s historic horse-drawn calliope.

Across the Resort, you will also find treats inspired by our traditional American celebration. You’ll be able to try the Red, White and Blue Strawberry Shortcake at Storybook Treats in Magic Kingdom Park and the Fourth of July Cupcake with apple pie filling, caramel buttercream and apple crisp topping at Disney’s Hollywood Studios, Disney’s Animal Kingdom or Downtown Disney. At Epcot, you can taste the Skillet-Baked Peach Cobbler with Vanilla Whipped Cream or the Red, White and Blue “Baked Alaska” Mousse.

At the Disneyland Resort, we’re saluting our nation’s birth in a big way with “Disney’s Celebrate America! A Fourth of July Concert in the Sky.”

The Disneyland Resort fireworks spectacular will be held each night at 9:30 p.m. during Independence Week.

Every evening, you can also wear a pair of illuminated Mouse Ears and “Glow with the Show” during performances of “Celebrate America!” at Disneyland park and the patriotic pre-show to “World of Color” at Disney California Adventure park.

And at the Disneyland Resort, you can enjoy Red, White and Blue Mason Jar Desserts at Carnation Café, and Patriotic Cotton Candy, Apple Pie Pockets or 4th of July Cupcakes, in shops all along Main Street, U.S.A., at Disneyland park.

Whichever Disney park you visit in America, you’ll discover a weeklong celebration from July 1-7. Let us know in the comments when you’re visiting.