Among his many amazing contributions to Disney Parks, Imagineer Kevin Rafferty was on the concept development team for Cars Land, where he served as creative director for Radiator Springs Racers. He also was the co-creator and show writer for a number of attractions including Toy Story Mania!, Mickey’s Philharmagic, Test Track, Rock ‘n’ Roller Coaster Starring Aerosmith and Finding Nemo Submarine Voyage. As if all that wasn’t awesome enough, Kevin created the story and name for the original The Twilight Zone Tower of Terror.

I asked Kevin Rafferty, Jr., to share with Disney Parks Blog readers some of his memories of growing up with an Imagineer and what it is like to work with his father now, here at the Happiest Place on Earth. 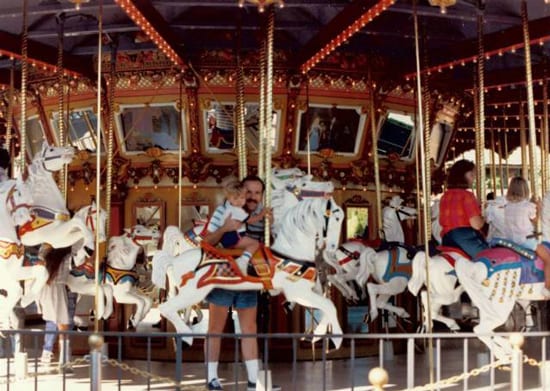 What was it like to have an Imagineer as a dad?
It’s more like having a dad who is an Imagineer because he always put family first. One of my earliest Disney memories was meeting Disney Legend Jimmy Macdonald, who was the original head of the Disney sound effects department and the voice of Mickey Mouse for decades. After Jimmy passed away, my dad and I would grocery shop and run errands for his wife, Bobbie.

Did your father ever take work home with him, or did he ever test out or share any of his projects or ideas with you when you were a child?
He always kept the lid on proprietary projects, but I remember as a kid sleeping next to his office at home and hearing him type away on the original “Walt Disney Imagineering: A Behind the Dreams Look at Making the Magic Real.” He must have worked on that book all night long for months. Then he would head into work the next morning.

Did you always want to work for The Walt Disney Company as well, or was it something you were drawn to later as an adult?
Deep down I think I always wanted to work for The Walt Disney Company. One of my favorite occasions was Bring Your Child to Work Day. It was like going to Willy Wonka’s chocolate factory. One time my dad brought me into John Hench’s office and introduced me to John. As a kid you don’t fully appreciate opportunities like that.

What did you learn from your father that you’ve used in your career at Disneyland?
I think the integrity and values I learned from him translate well into The Walt Disney Company’s culture. He also taught me to always put our guests, not myself or my career, first. The Disneyland Resort taught me something about him, too. It wasn’t until I got here and experienced the fast pace of my job that I realized how hard he worked as an Imagineer while I was growing up.

Which of the attractions that your father worked on is your favorite?
“It’s Tough to be a Bug!” holds a special place in my heart. I think it’s because of the theme song, which my dad wrote the lyrics to. When I was hired at the Disneyland Resort, Human Resources put me on hold during a phone call and the hold song was “It’s Tough to be a Bug!”

What does your father think of your work here on the Disney Parks Blog? Does he have a favorite story of yours?
His favorite posts are the “Every Role a Starring Role” videos I help produce. My dad reminds me that we are all part of one common vision to provide an excellent guest experience. He uses the example from “Finding Nemo” when all of the netted fish put their collective energy into swimming together and it saved them.