Fourth of July themed sweets at Magic Kingdom Park, Epcot and Disney’s Hollywood Studios are a special “Limited Time Magic” treat, on menus for just one week from July 1-7. 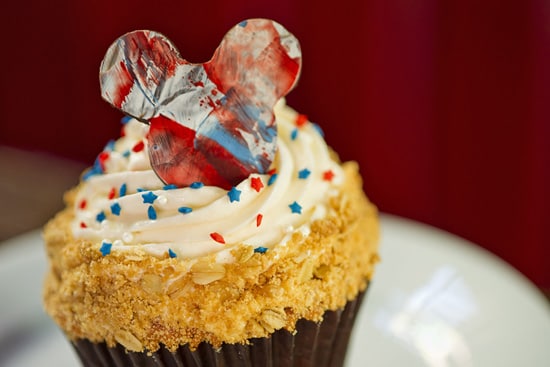 Over at Disney’s Hollywood Studios, ever-popular cupcakes celebrate the Fourth of July with an all-American “apple pie” cupcake – vanilla cake with apple pie filling, caramel buttercream frosting and apple crisp topping. Topped off with a flourish of red, white and blue sprinkles and a red, white and blue white chocolate Mickey Mouse. The cupcakes are on the menu at ABC Commissary, Pizza Planet, Backlot Express, Studio Catering Co., Starring Rolls, Rosie’s All-American Café and Fairfax Fare. Cost is $4.99 and the cupcakes are one snack entitlement on the Disney Dining Plan.

At Sunshine Seasons Bakery in The Land Pavilion in Epcot Future World, a fancy Baked Alaska Mousse is on the menu, a red, white and blue concoction of raspberry, white chocolate and blueberry mousse dipped in meringue. Cost is $3.99 and it is one snack entitlement on the Disney Dining Plan.

In the Magic Kingdom Park, StoryBook Treats is adding a red, white and blue strawberry shortcake to the menu – white shortcake, red strawberries and fresh blueberries for a touch of blue. Cost is $4.99 and is not dining plan eligible.